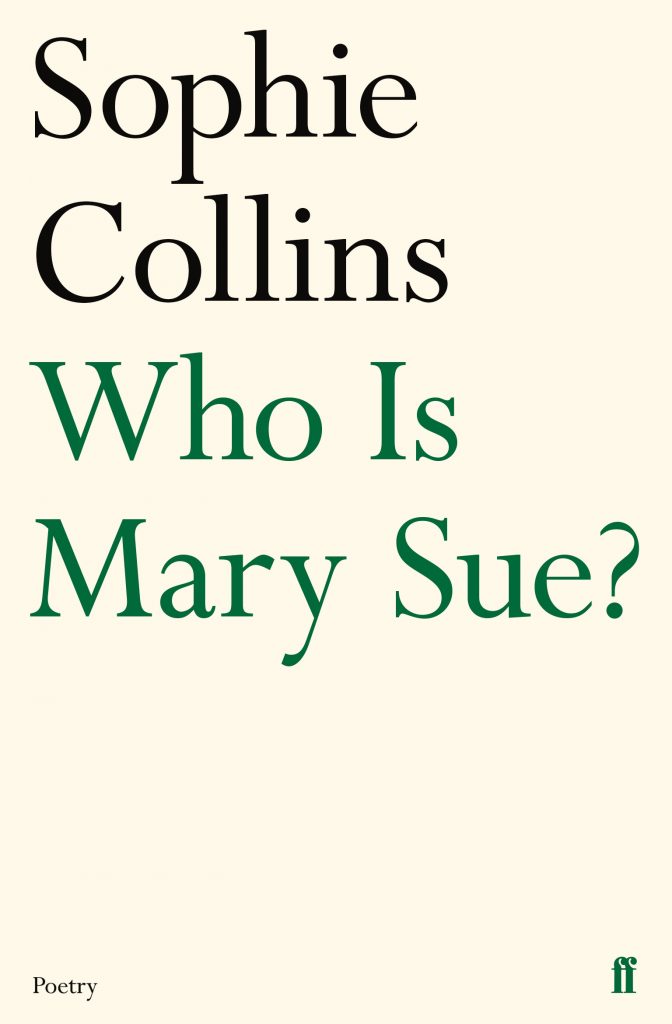 Review: Who is Mary Sue? by Sophie Collins

In Sophie Collins’ Who is Mary Sue? (Faber 2018), the interrogative provides backdrop to the deep problems of privilege, identity, gender, and Collins shapes her collection to surprise as much as shock us awake. And she not only makes the world we already know new through poetic image, but returns us to the ignored, truncated, and occluded voices and persons erased and silenced by convention and tradition. Which is to say, to read Who Is Mary Sue? is to encounter our hidden evils, and to be equipped to reach beyond them.

Sophie Collins was born in the Netherlands and studied in England and Northern Ireland. She is a translator, a poet and editor — see also the excellent journal tender (co-edited with Rachel Allen); her edited anthology of experimental translations Currently & Emotion: Translations (Test Centre, 2016); and the little orange Penguin Modern Poets 1 with Emily Berry and Anne Carson. In the opening passages of Who Is Mary Sue? we read from an interview with Jamaica Kincaid, “It’s not about me but it’s about things that I’m familiar with.”

When I lived in the UK, Claudia Rankine’s Citizen was published by Graywolf, and then a year later by Penguin in the UK, which was when everyone there started to talk about it. The talk was whether or not it was a poetry collection. Gasp! This is what you want to say about this book?, I wondered privately. You don’t want to talk about what it exposes, you just want to talk about how it is or isn’t poetry? There’s that. But like Rankine, Collins pushes us out to sea formally in a way that yields and embodies powerful meaning. She exposes the darkness of privilege that is in us, and if we are comfortable asking only formal or genre questions, we hide from the light bursting in every corner of Who Is Mary Sue?

Among what I could most commend to you in Who Is Mary Sue? is its moves through prose, poem, white space, interview, extract, blank page, truncated phrase, to encounter the limits of empathy in order to extend those borders. From the outset, we are met with testimony, lyric, and meditation confronting the silencing of women’s voices in the world and history of literature and in the world and history of now. The engine of this book is precision, and Collins deftly cuts through the miasmic “curdled smell and texture” of vapid tradition, i.e., “disposable nappies” (43). The book as a whole moves through sequences and individual poems, and I cannot find a better example of such a hybrid kind of book; the boundaries are at times seamless, at other times permeable, and always to the benefit of content, of reading.

Collins’ representation of imagery is tied intrinsically into her brilliant syntax, and we hear the melodies of translation in lines such as “A theory about perennially leafless trees: they are petrified angels.” What stands out here is how syntactically the simile is resisted; the focus is on the speaker in a non-traditional, non-anglo-masculine literary style. If the speaker says, “Trees like petrified angels,” we read it as we read any other poem, line, or image from the long English lyric tradition. One brilliance in Collins’ work is how she keeps the tradition of lyric image but transcends masculine a priori privilege. In the line above, we don’t meet the speaker until we read “angels,” until we finish the line. And that’s when the human comes alive, and that’s when we are changed. Not only is the image “made new,” our thinking is, and we hear the personal in a fresh musical mode, one that subverts and surmounts whatever might be meant by the tradition. In “Before” (52-53), the translation of history and myth into quasi-technical diction notes the “yearning for empirical consequence” as well as a humanising and compassionate universalising and updating of story for us to reckon with.

This book is filled with confrontation, but also hope. What I expected as a reader was an experimental book about fan-fiction, where I was unequipped to engage with the content. What is actually here in Who Is Mary Sue? is an incredibly important book about women’s voices and bodies, especially in literature, but including testimony of enslavement and other abuses of power privilege. “We are congruent when how we act and what we say is consistent with how we are feeling and what we are thinking” (54) one speaker confirms in the prose poem As bread is the body of Christ, so is glass the very flesh of the Devil. We confront disempowering episodes in “The Palace of Culture and Science” when “I noticed men bending letters, repeating / my ideas” (56). Where persona and prose interweave with short poems through both the middle sections of “The Engine” and “The Engine Continued,” Who Is Mary Sue? closes with a triptych “Postface” in which “The author receives an email from a press that wishes to publish her first book” (97). Although “She wishes to quit her body,” and “opens a box marked violence against women box 5” and “The author opens a box marked violence against women box 4” (98), structures of disempowerment are razed within the life of the person, and the larger patriarchal are confronted. However, Collins is a masterful poet, and where she includes a trajectory toward justice, she nevertheless places this within the ambiguity of language.

Ultimately, “The author enjoys a renewed sense of the mind’s ductility. / She works on her book” (99) and this emphasis on “ductility” reinforces not only the thematic work of Who Is Mary Sue? but also the formal fabric of its text.

Andy Eaton is the author of Sprung Nocturne, a pamphlet, and his poems appear in Copper Nickel, Narrative, Ploughshares, and The Yale Review, among other places. He is at work on his first collection of poetry.
PrevPreviousReview: The Final Voicemails by Max Ritvo
NextReview: The Popul Vuh, Translated from the K’iche’ by Michael BazzettNext
MASTHEAD