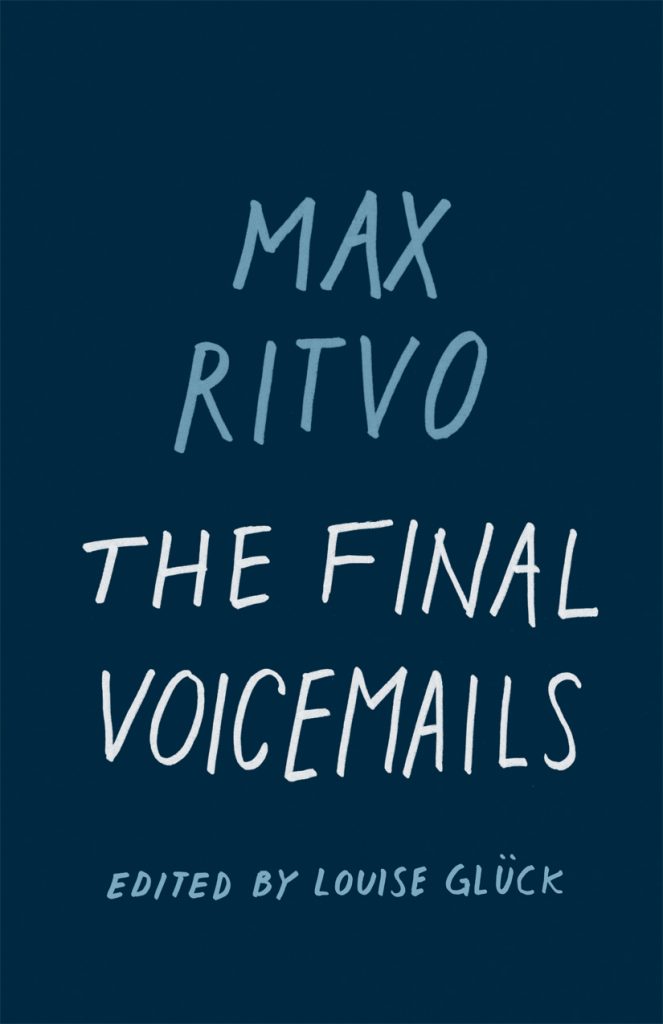 Max Ritvo’s second and final collection of poems, The Final Voicemails, has been published posthumously by Milkweed, two years after his death from Ewing’s sarcoma on August 23, 2016. Ritvo asked Louise Glück to select the best poems of what remained, both from earlier work and poems written toward the end of his life, a time of which Glück notes was “volcanically productive.” Max Ritvo was twenty-five years old.

I read Max Ritvo’s The Final Voicemails as if viewing a comedy routine rather than a TED talk. Richard Pryor and Max Ritvo were both Sagittarians. Richard Pryor said in an interview that “sometimes pain is funny later on.” In Max Ritvo’s poem, he tells the world, “Don’t leave Maxcat alone / or I’ll have to see exactly / what I have in store for me.” As hope through humor intercepts pain in nearly every poem, so does the counter of the poisonous vein of thought: “But when you decide someone has something to say / their silences speak to you too —”

Ritvo the poet feeds upon images, an activity which must have served him well as a distraction to talk himself out of death. He creates the perfect image to explain a component, an appendage to his illness, throwing it up only to consume it. These images extend his life. That is, until the Soul Eater introduces himself. In the poem, “The New Friend,” Ritvo begins to perform a high wire act between this life and the next, as the next life makes its presence known. In the third visitation, or Act III, “all the eaten souls are becoming flesh / like little fairy lights hardening into raisins.” The light that suffused his first collection of poems, in which he is accompanied by God, seems to have dimmed, and Ritvo journeys through both real and imaginary rooms he has created, rooms in which both the animal and the inanimate are representations of death:

Two bedtimes ago, through my window,
I heard a cat get eaten.
As the cat split, it sounded like
a balloon string put to scissors
to make curls so the birthday boy
would smile extra wide.


Food in his life has become a sweet sadness, as has sex. What springs up is an immediate empathy toward what is being sacrificed, as well as empathy toward his own body breaking apart. Ritvo found himself unable to consume a plate of scallops upon reflection, because “their whole lives were / eating and suffocating.” He opens a fortune cookie, and “It said in blue strip / You must learn to love yourself.” In “Dinner in Los Angeles, Raining in July,” “the sea urchin is my mother / moving on spiny feet / meat clotting with her desires.”

On his new marriage:

and mud is the marriage lace,
and your opinions are newborn
hares and toads and musical nuggets,
stirring your organs as the mud hardens.

Max Ritvo has divorced himself from the dying body, choosing to pose the body before him like a figure model and paint it. He was a surreal artist preoccupied with how to paint both the soul and the body. His work has been compared to Keats, if only for this preoccupation.

The towel torn
so what he’d like hidden
is exposed —
where his flesh is like a bruised heart.

As the editor of Ritvo’s last collection of poems, Louise Glück has wisely chosen to place selected poems from 2013 at the back of the book. The poems serve as pallbearers to the heavenly realm Ritvo imagines for himself. He becomes, not without humor, a living myth before his time. “Lajuwa Forgets How to Love” is a love letter to the physical body:

Aworokokin’s naked eye rolled in his naked body
As I buried him. He became a yolk, the inside eye, oju inu.
This eye becomes infatuated, casts spells: unintentional and
intentional,
receives dreams: grafted on top of what is real, or when you
are asleep.

These poems are but a threshold, in which we the reader are invited back in, to move through Ritvo’s gilded body full of pomegranate seeds. This book is not on dying, but on how a young and brilliant mind traverses a world where bricks and sticks turn inward, “As all the doors in the world / grow heavy / a big white bed is being put up in my heart.” Max Ritvo, the Sagittarian, the humorist, the broadminded, the truth seeker and noble leader. I can only pretend, through the reading of this final collection, to have known him.

Betsy Blair is a first-year poetry MFA candidate at the University of Virginia. Her poetry has appeared in The Absolute, Blood and Thunder Journal, The Daily Palette, Illya’s Honey, and Malpais Review.
PrevPreviousReview: Wilder by Claire Wahmanholm
NextReview: Who is Mary Sue? by Sophie CollinsNext
MASTHEAD