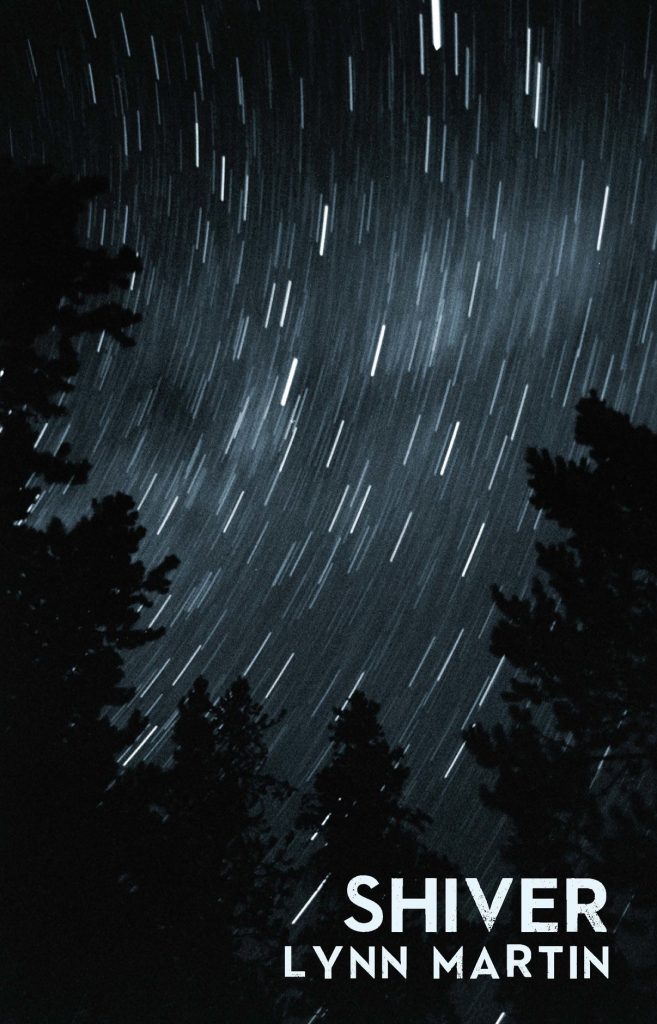 …where not a mile down the road

runs a river—clear and clean
called ‘Rockfish.’
Or, simply, the river.
Or even more simply, home.

In his introduction to Matsuo Basho’s Narrow Road to the Interior, translator Sam Hamill shares a telling anecdote from the poet’s life. When one of Basho’s acolytes lavishly praised his description of a fish on a fish seller’s shelf, the poet responded that what he loved most about the poem was its “ordinariness.”

The word “ordinary” usually leans closer to insult than praise. Few poets endeavor to write ordinary poems. Yet like the best haiku, in the “ordinariness” of Lynn Martin’s poetry lies its power. The poems in Shiver build on a legacy of resonant simplicity left to us not only by Japanese poetic masters, but also American ones: Whitman, Frost, the imagists. With deep attention and almost subterranean wisdom, Martin’s poems practice the art of trusting in the commonplace.

I say “trust” because it’s an act of faith to describe things clearly and simply; one runs the risk of being called unsophisticated, or worse, of being unsophisticated: skimming the surface of the human experience without plumbing its depths. But in these poems, simplicity leads straight to the elemental, to the bedrock realm of life-shaping truths. The lines above, taken from the second poem in her collection, arrange themselves around a distillation. They also map out the magical process by which poetry works. In an exchange of words for physical and felt experience, the name of the river becomes the river itself, which becomes “home”—more a feeling than an actual place, and one of the most ancient and basic of human needs.

Many of the early poems in Shiver evoke the steady, patient, meticulous art of building or fixing houses. Although Martin, who passed away in 2016, most recently worked as a special education teacher, she lived many lives and was employed for a long time in carpentry and construction. Her rich, heady descriptions intoxicate us with the beauty of both forest and wood: “wind-flexed limbs” of hemlocks, “scorched heart pine,” “sweet-scented, blood-red cedar.” At times, reading her poems feels like entering a beautifully built house constructed from the simplest and finest raw materials. Take these lines, from “Chinking the Cabin”:

The chestnut logs—
broad and long,
raised and stacked,
square and plumb.

Here, sound, syntax, and sense dovetail to evoke a sturdy and lovingly built space. Martin places three-beat lines—pairs of monosyllabic adjectives—one on top of the other. Smooth progressions of vowels—short to long o’s, long to short a’s—seal the words further together. Her lines feel as artfully stacked as the logs are.

But what interests Martin most about the houses she evokes is not their capacity to protect or shelter, but their potential to collapse and let in the world. These houses exist in an ever-shifting dialogue with the landscape. In “Chinking the Cabin,” the speaker fills spaces between logs, which anthropomorphically “wink or gape open / to call in sun, rain.” In “No Difference on Old Roberts Mountain,” outside and inside become almost indistinguishable through the “rippled window glass” of a dilapidated house.

Shiver was Martin’s last collection and remained uncompleted at the time of her death, which adds a certain poignancy to these poems. The voice here is measured, quiet, and resonant with prophetic wisdom. Unplagued by existential anxiety, Martin’s speaker welcomes deterioration and dissolution with inexorable warmth and calm. In “Again,” she asks to be buried in “a shallow grave,” so that she can “mingle with living things.” In the small gem of a poem “Come Winter,” she begins to discover herself in a tree outside her house: “The window is a polished mirror / of my heart so lush. / I am rooted, evergreen.” The title is taken from the poem’s sixth line, “Come winter, [the berries] will ripen”—straightforward enough, but especially teased from its original context, the phrase frames the poem as a gentle invitation to death.

A student of Mary Oliver, Martin writes from a place of deep and practiced attention, particularly to the natural world. Her close observations of the ordinary have the power to ferry us swiftly into the transcendent. These small journeys can happen in a single breath; we’re shown an empty walnut shell on the ground, and before we’ve even realized what the image is hinting at, we arrive, dizzied by beauty and brevity, at the afterlife: “Here’s the green husk of a walnut—/ the next world.”

Martin’s transcendent moments, however, ultimately return us to the wonder and immediacy of this life:

And this is the part where
soul swings open. Just like that
there you are and what matters
is what happens.

And for all their exhilarating motion, these ecstasies begin with stillness, with (as Martin puts it) “not falling but standing still in love.” Before making her home in the mountains outside Faber, Virginia, Martin traveled through Mexico and lived in a wide range of places in the U.S., from Boston to New Orleans. But ultimately, these are poems of staying. Even “Continental Drift,” a tour-de-force paean to hitchhiking that falls toward the end of the book, keeps rhythm by a kind of directive to return.

As we wander out into brief, thrilling gusts of Whitman-esque litanies, a question, first posed by the speaker’s mother, calls us back: Where are you? Like the mind itself in its convolutions of daydream and worry, the poem casts out and, with each iteration of that question, reels back, moving toward a peak moment of ecstasy—the mysterious phrase “Radiant transport!”—before returning to the refrain that has become equally mysterious, grounding us in air: Where are you?

The answer is far from the stability and safety of the earlier poems in this collection, but the effect is the same: the poems in Shiver orient us toward the powerfully ordinary, toward home. Their voice also remains unchanged: it is clear and pure as a glass of water. These are thirst-quenching poems, nourishing poems, poems that return us to what’s most important. They ask us to awaken inside our lives, reminding us that—in an age where everything seems designed to lure our attention elsewhere—the joy and the meaning is to be found in the place where we’re sitting at this very instant. Where are you?

Lindsay Hill is a writer and editor based in Charlottesville, Virginia. Her poetry has appeared in numerous journals, including Ploughshares, The Southern Review, Bellevue Literary Review, and Barrow Street. Her chapbook, One Life, was published by Finishing Line Press.
PrevPreviousReview: White by Deni Ellis Béchard
NextReview: Baron Wenckheim’s Homecoming by László KrasznahorkaiNext
MASTHEAD