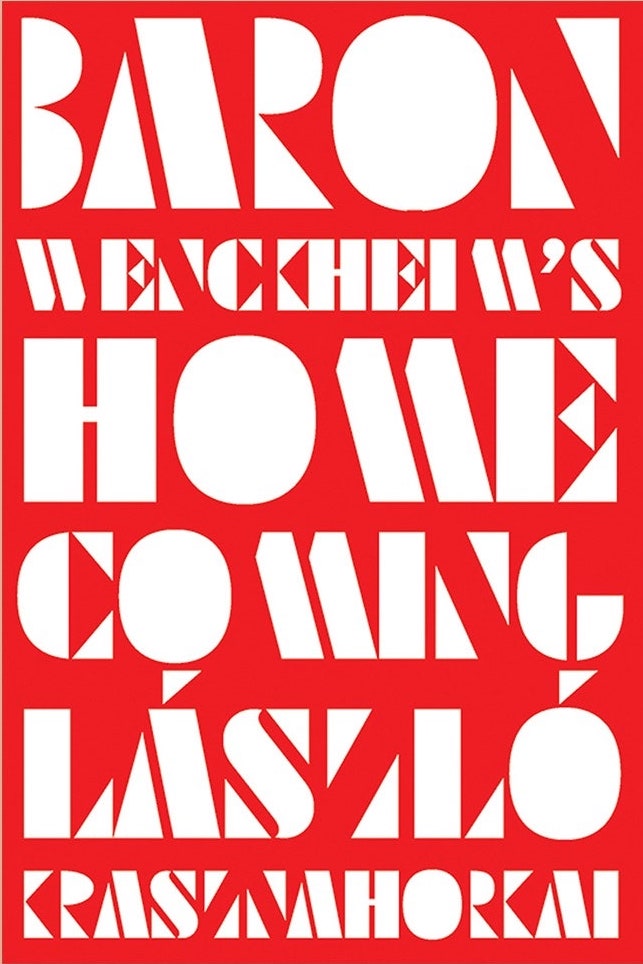 Open the first page of Baron Wenckheim’s Homecoming and you will see a passage titled “WARNING.” Some seven pages long and positioned before the book’s title page, before the table of contents, before, even, the copyright page, this prologue (if prologue it could be called) consists of a scene in which a mysterious Orchestra Director gives instructions to the players about to give their performance. In his speech, the Director specifies a few things: first, the music must be played because it must be played. Second, this performance will not be enjoyable for them, the players, but they can take comfort in the fact that nor will it, by any means, be enjoyable for him, because “I,” he remarks at the end of the passage, “[am] simply waiting for all of this to be over.”

Neither the director nor his players reappear in the course of the book. How could they? Laying firmly outside of the diegesis of the novel, they are not characters. The Director is, quite simply, God, or whatever force set in motion this universe, and the players are of course us, doomed to play out our song until life ends and we all go up in flame. And we will. That is the one thing that Baron Wenckheim’s Homecoming promises with a calm certainty: we will.

Let’s get the basic stuff out of the way: if you’re only going to read one Krasznahorkai novel, then it should be this one. Highly similar to the novels which made the Hungarian author famous to the Anglophone world, Baron Wenckheim’s Homecoming is nevertheless a more definitive statement of his ambitions and, I think, a flat-out better book than its predecessors. Which is not to say that it’s pleasant—it is, in a way, and in fact the first half of the book is without a doubt Krasznahorkai at his most darkly hilarious—but despite the many lighthearted and absurd moments, as one progresses through its 500-some pages, the book cannot help but to cast off that mask of lightness and reveal its nature: depressing, awe-inspiring, and, somehow—and here is the novelist’s true gift—as painfully compassionate as it is brutally callous.

The plot—though ultimately it is only one more shallow pretense to be cast off—concerns an aging Baron who, having lived his entire adult life in Buenos Aires, now at the end of his life, is forced to leave Argentina, and decides to return to die in the little Hungarian village of his birth. The rumors say that the Baron has had to flee because of gambling problems, and while that is not exactly a lie, the reality is that the Baron suffers from a neurodegenerative disease and is struggling with cognitive problems of the most fundamental sort. All Wenckheim wants is to see his adolescent sweetheart one more time, unable to understand that she will have aged as much as he has in the intervening years, and all every politician, cop, and con-artist in the town wants is to get him to part with his fortune by any means necessary. As they prepare to embezzle the elderly millionaire and the old sweetheart warms to the prospect of his arrival, he approaches by train through a now-foreign landscape, and with that, the stage is set for a wonderfully sad implosion.

As I say, however, plot is a flimsy pretense, and what the novel is in fact concerned with is, like much of Krasznahorkai’s work, the Apocalypse. But while that particular theme has of late become ubiquitous in art and entertainment, what the word “Apocalyptic” means in the context of a work like Baron Wenckheim’s Homecoming is utterly different from what associations the term might ordinarily bring to mind. Here, there is no interest in elaborate narratives of post-apocalyptic survival, spectacular natural disasters, nor even, at least on the surface level, in ecological catastrophe as such. The interest here is in The End, itself. The fact of endings; the fact of being and suddenly not being; death.

“Eternity will last as long as it lasts,” reads the novel’s epigraph. And when it ceases to last, what then? The answer forms the last ten or so pages of this novel, which are in my opinion some of the best and most terrifying pages in modern fiction.

Despite the fact that so much of Krasznahorkai’s work has been circling around the same apocalyptic theme (although some of his most interesting books—for instance Seiobo There Below—are precisely those in which he is not “playing the hits,” so to speak), only here do those intimations of decay and inevitability that have been wafting through his oeuvre reach their ultimate conclusion. Indeed, much of the book consists of the rearrangement, mutation, and evolution of motifs and elements from Satantango; War & War; The Melancholy of Resistance, and even the strange little collection The World Goes On: here again are the mysterious trucks, the gangs of criminal orphan children, the solitary intellectual consumed by thought; here again are the speeches in Kossuth square and the milling of silent, unknown crowds. Even the Satantango reappears. If there is one thing that might alienate readers of his previous works, it is this riffing, which, although I think it justifies itself in the end, can without a doubt be frustrating.

As far as the translation goes—and saying what little I can without being able to read the original—this is not at all the same Krasznahorkai as that which Geroge Szirtes rendered into English for such titles as Melancholy of Resistance. The author himself has said that of his two translators, Mulzet is the more literal one. While I can’t speak to that, Mulzet’s Krasznahorkai is without a doubt more awkward, less elegant than Szirtes’— and that is a good thing; that is a very good thing. Translated in this way, the notoriously long sentences reveal themselves as imminently readable, the experience ceasing to be an exercise in complex mental bracketing and becoming, rather, one in which it is easy, once you get used to it, to let the multi-page torrents of text simply wash over you, their meaning accretionary and their rhythms  like a comforting and all-consuming hiss of white noise.

I will end on an off note. Roberto Bolaño’s novel 2666 revolves around the figure of Benno von Archimboldi, an fictional author and ex-Nazi soldier, whose life and work (of which we never actually get to read a word) are tied in inexplicable ways to the violence that would consume Latin America decades later. Towards the end of the book, there appears the following description of one of Archimboldi’s novels:

The style was strange. The writing was clear and sometimes even transparent, but the way the stories followed one after another didn’t lead anywhere: all that was left were the children, their parents, the animals, some neighbors, and in the end, all that was really left was nature, a nature that dissolved little by little in a boiling cauldron, until it vanished completely.

I read that sentence about a year ago and felt a great yearning to read this fictional author, Bolaño’s idea of what the prophetic author of the XXI Century would be like. Then, by coincidence, I did read him.

All in all, I believe that Baron Wenckheim’s Homecoming will be regarded a classic in a few years—if, that is, time has still not ended by then.

postscript:  Is the pessimism absolute? I will say only that, if you look at the “Dance Card” at the end, you’ll notice that almost all of the “materials” used in this novel are listed as DESTROYED. A few, however, are simply MISSING—and among these are the Professor and the stray dog he befriends.

JE Suarez graduated with a MFA in Fiction from the University of Virginia.
PrevPreviousReview: Lynn Martin’s Shiver
NextReview: Verge by Lidia YuknavitchNext
MASTHEAD