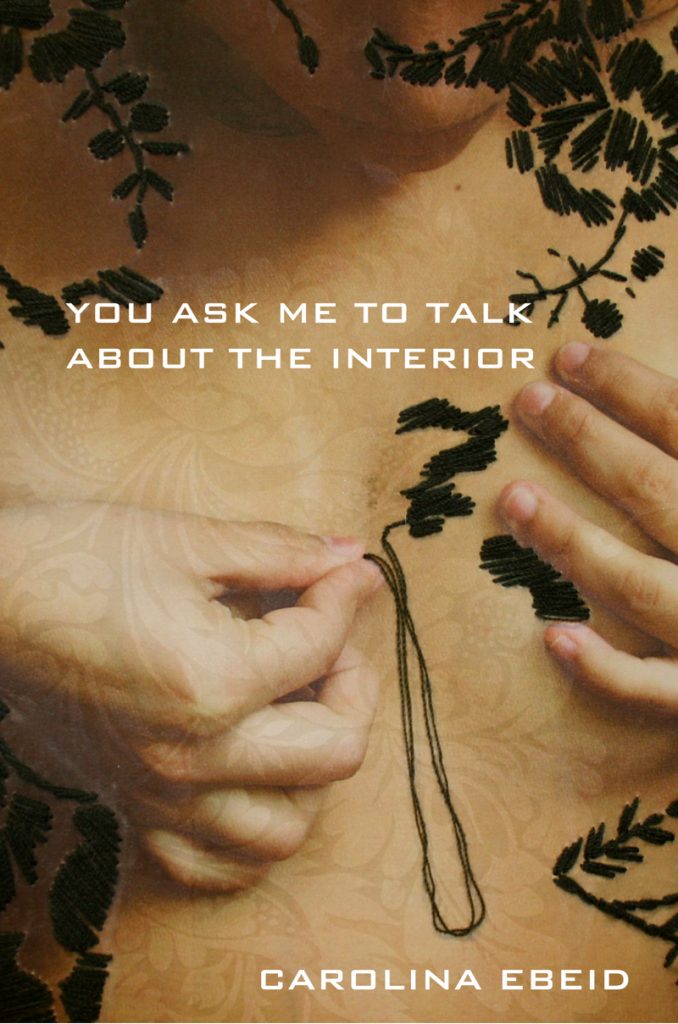 You Ask Me to Talk About the Interior
by Carolina Ebeid
Noemi Press
September 1, 2016

Review: You Ask Me to Talk About the Interior by Carolina Ebeid

Early in her debut collection, You Ask Me to Talk About the Interior, Carolina Ebeid asks, “Reader, can we have a meaningful exchange / without knowing how I assemble heaven?” This inquiry reverberates throughout the book, as Ebeid proves herself to be a poet with one eye on the reader and one eye on heaven, one foot in the strange thing-ness of this world and one foot in the metaphysical. Her poems sensitively explore a capacity for devotion that turns inward on itself, that doubts both its intentions and its veracity. She writes tellingly in “I Am A Little World Made Cunningly,” (a title borrowed from John Donne’s Holy Sonnets), “I kneel & am still, & for this // I am suspicious of myself.”

Always at once holy and suspicious, Ebeid’s poems assemble a heaven populated by “birds with tin-whistle throats,” “sackcloth puppet[s] / packed with sawdust,” and “a smiling panda… strung up / in the elm.” This heaven is no meek and bloodless place populated by pastel cherubs and bland celestial choirs. Like Ebeid’s vision of earth, it exists on the cusp of the sinister, the violent, the coldly modern. At one moment, she may write rhapsodically that, “A boy’s choir reaches glad falsetto heights / where the angels cloister,” then jump just as swiftly to clarify “And by angels I mean / satellites, in their seraphic orbits / taking photographs / of us.”

Motifs of photograph and image recur throughout the collection, often in tandem with themes of violence. This relationship is expressed clearly in a series of largely prose poems, each entitled “Punctum.” As Ebeid explains in her notes, she borrows the term punctum from Roland Barthes, who uses it to denote “the object/image within a photograph that leaps out and punctures the viewer,” that is to say, “an accident which pricks, bruises.” Ebeid explores how both image and poem depict violence, and in a sense, perpetrate it. In them, violence is at once frozen and ongoing: “This is how we describe the scenes in photographs,” she declares in “Punctum / Metaphora, “as though the actions in them were still going on. My father is throwing a rock in this picture…. The photograph captures a skirmish in the West Bank of Nablus; the man holding the rock is my father insofar as Juliet is the sun.” The image is metaphor, simultaneously a true depiction and an illusion.

As these selections suggest, the so-called “personal,” “political,” and the “mystical” teem together fruitfully in You Ask Me To Talk About the Interior. The scope of the poems encompasses Palestinian struggle, political and spiritual displacement, the “necessary voyeurism of the news,” and the vagaries of a son diagnosed with autism. These potentially disparate threads are woven together by Ebeid’s deep investment in language and her insistence on an ethical commitment between reader and writer, albeit a sometimes ambiguous ethic. She is concerned with the morality of reading, writing, and seeing, of crafting words and images. In her work, the reader is no longer a neutral observer, but, by nature, a bystander. Can this reader/bystander, however, be transformed by the art? As the poem “Dear Bystander” asks in its opening:

Ebeid is deeply mindful of the ways words can create both heaven and hell, paradise and horror. Poems, here, are copies of the world existing in a liminal space of beauty and terror. As she writes in the luscious poem “Albeit,” “We live in a copy / of Eden, a copy / that depends on violence.” And yet even as the speaker grapples with the violence of nature, she is also moved to say, “I have wanted / to make you something // beautiful,” something beautiful which is in turn “an allegory for the soul.” As allegories for the soul, art and language are not sterile, transcendent things, but visceral, messy, even bloody. As the book’s closing poem, “M, Marina,” queries:

what is this art if not the hunt
for meat, the animal lanced
& hauled across the tundra
of the notebook
reader, will my heaven look anything like yours?

For Ebeid, poetry is thus both hunt and heaven. It is a “window facing heavenward,” as she describes in “Punctum / The Transom” and a window in which, “you, the reader, the beautiful friend [are] looking out.” At times, her poems are an opaque window, tending toward the mystical and cryptic, jarring us with their unfamiliar language. This is not to say, however, that her collection is all solemnities. There is a lightness, a playfulness, at work as well. This surfaces in her punning and joyful word play, as well as her insistence that even though we have “what war makes,” we also have a feeling:

in the chest like girls
& boys pushing
furniture aside for
the dancing, dancing