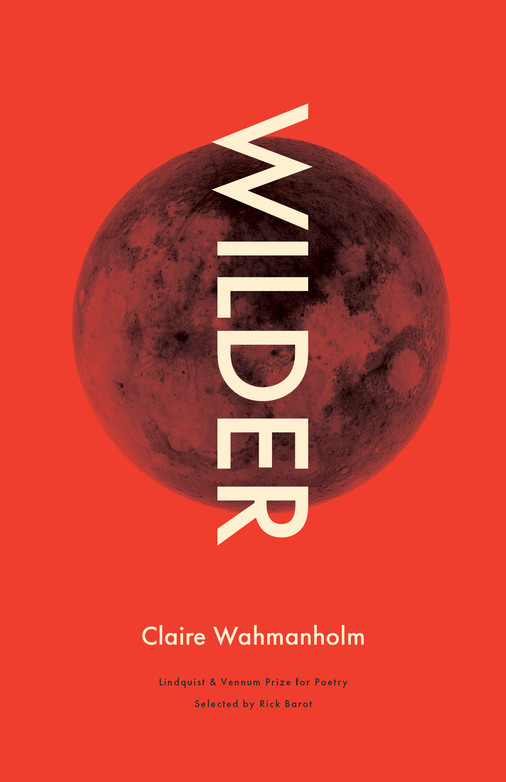 Wilder by Claire Wahmanholm is a rare prophetic glimpse into a future haunted by the now. An alchemist of language, Wahmanholm’s first full-length book since her award-winning chapbook, Night Vision, is a revelry far beyond what I believed imagination could conjure. She gives us a complete stranger of a world, a planet ruled by its own profound logic of consistency and inconsistency—a planet that manages to feel frighteningly possible & intuitively true. In this book, Wahmanholm’s collapsing world is exceedingly full of texture, solemnity and phantasm. She masters a mesmerizing spareness of detail that causes the white spaces to blare in our ears. This is a collection of feral & harrowing emptiness. Imagine the loneliness of an endling. Imagine if Judgement Day were silent.

In a voice so thoughtful, pure and vivid that it cannot avoid being beautiful, Wahmanholm relays to us a collective death of quiet & searing agony: “How did we dare have children we couldn’t save? // If we closed our eyes the falling apples / sounded like heavy rain.” How does she manage the tender so closely beside the grotesque?

In moments of unspeakable (and so, unspoken) mutilation, the poet invents a fascinating gore-by-omission: giving us the necessary violence of her subject matter through the withheld & surreal. “My eyes which were / already honeyed shut // over two cells / of empty space.” The narrative of a man-made disaster funneled through Keats’ negative capability. “I tore myself in two along my spine and sent half of me / into the night to see if I would make it through.” The gruesome & tragic are present but drained of shock-value and stated without sentimental frill. The earth is dying, but you already knew that.

Wilder possesses a voice of sacred extremes, simultaneously contaminated and pure, gauzy and mercilessly sharp, measured and, well, wild. These poems dual-wield clinical vernacular and arrestingly graceful lyric, giving language to the emotional phantom pains of our Earth’s destruction. “Speculation about the state of the sky— / whether it is an infinite mouth dragging its gasp across us.”

I did not realize how disconnected I am from my own grief and terror surrounding global warming until Wilder burned off my numbness. This book’s aching vision of a ruined homeland woke me as, drawn in by the poet’s impeccably elegant voice, I couldn’t then look away from the technicolor warning taking shape as a crystal ball.

Wahmanholm leaves the narrative hauntingly, masterfully open, witnessed in the voices of humans or aliens or ghosts in a deteriorating Elysium. In Wilder, readers awake in a landscape that has come alive to obliterate its citizens with the gentlest touch, to unravel us in our utter frailty, to take us down with it. Who or what is the us here? You cannot know, but from the first poem, you know you’re among them.

Aimee Seu is a second-year candidate in poetry at the University of Virginia.
PrevPreviousReview: An Untouched House by Willem Frederik Hermans
NextReview: The Final Voicemails by Max RitvoNext
MASTHEAD