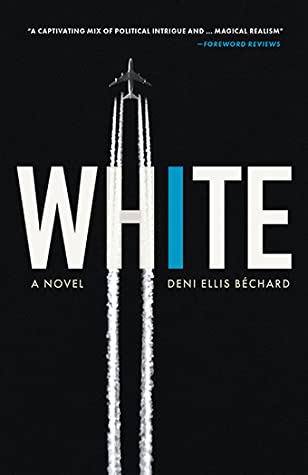 Deni Ellis Béchard’s sixth book and third novel White is a high-res contemporary replica of Joseph Conrad’s Heart of Darkness. Part investigative journalism, part travel journal, White is captained by an American-Canadian journalist, Béchard (eponymously named), as he travels into the Congolese jungle to profile a mysterious, rogue conservationist. As he descends into the Congo’s dense briar of politicians and mundele, American NGOs, diamond smugglers, and Congolese folk religion, the novel ferociously observes modern-colonialism at work and its continuing manifold influence on developing African nations. And yet, at its heart, White is also a story about stories and personal fictions. Over the course of the journal-style novel, Béchard’s childhood memory, fantasies, and subconscious projections overcome Béchard’s narration, like water slowly sinking a leaky riverboat, and his text blears into a fever dream of multiplying Kurtzes and uncanny hallucinations. White’s self-aware, self-immolating interrogation of colonialism, whiteness, and fiction makes for a smart and dizzying feat of writing.

By and large, the fictionalized Béchard is a culturally sensitive, intelligent, and smooth white guy. He’s armed with a quick check-privilege reflex and rehearsed existential soliloquies. Caught in a midlife, mid-career malaise when the novel begins, Béchard explains that he has taken to marooning himself in foreign nations where is able to pay his way back home by tracking down compelling international stories to write about. White opens on one such expedition: an international flight to the Congo where a rogue conservationist named Richmond Hew is thought to be bunkered in the jungle. During this opening flight, Béchard immediately learns of yet another compelling and perhaps related story from a woman seated beside him on the plane named Sola. Sola shares with Béchard that she is traveling to the Congo to facilitate a study on a “white witch”— a mysterious English, French and Lingala-speaking street child who claims a white demon stole her black skin. Sola invites Béchard to interview the suspect anthropologist, Bram Rees, who is holding the young girl while he conducts his study. This story evolves into a sister narrative to the central line NGO line and broadens Béchard’s article into a study of Western presence and corruption of the Congo.

However, the fictionalized Béchard tends not to notice how his own presence in the Congo mirrors Richmond Hew and Bram Rees, or how he too wields the colonial gaze, even in his attempts to expose the corruption of whiteness and modern colonialism. But the authoring Béchard, I think, does notice. During Béchard’s and Sola’s conversation, we get to see Béchard become increasingly distracted by his attempts to identify Sola’s ambiguous ethnic background without revealing his curiosity, which he knows is an off-putting white-ism for people of color. And, likewise, throughout the novel, Béchard offers a window into his internal efforts to conceal his auto-tendency to racially profile the brown and black characters he works with during his investigation. He often falls short of successful despite his scrupulousness, as in this scene between Béchard and his native travel guide Baraka, when Béchard offers to write an article about the man’s poetry:

“I think it could be interesting to a Western audience. You and your poetry capture what’s happening here — the domination of the NGOs alongside the exploitation of foreign powers. I would show your writing as a cultural expression of the Congo’s chaos after the wars…”

With a sudden motion, as if stung, he reached quickly for his glasses… I now saw how stern and evaluating his look had become.

“I do not wish,” he said, “to be a sad, comic figure for one of those evaporating internet articles that always appears to be new but is always the same.”

Here the article Béchard offers to write (and we can guess the bulk of his international work as well) would distill the experiences of a Congolese person into a commodity to be sold in Western markets for fast capital. As in many scenes, the fictionalized Béchard fails to fully recognize how quietly prone he is, as a white man, to consume the labor, culture, physicality, etc. of the Other to benefit himself and soothe his own chronic boredom.

Throughout the novel, the authoring Béchard is keenly self-aware and delivers searing self-critique. White glares unsparingly at itself (text and author) as an extension of the West’s continual exploitation of the Congo’s ravaged infrastructure and rich mineral resources. One way it achieves this effect is by drawing a relation between popular literature and the internalization Western ideology. Béchard describes his consumption of books in multiple literary genres:

“Sometimes I read books with magic, in other lands, and I think that if I had left home younger, I could have found a better life, because that is what the heroes are always doing. There are enemies and monsters to be fought, but at the end of that, there is always a better life. And I also read horror books because the world is full of terrors, of things that eat you, of people who look at you with eyes like fangs, and after each story of horror, I am grateful. I have lived the horror in my mind and survived it, and I am stronger, more alive.”

Béchard also claims to be imaginatively changed by novels: “I loved books as a child and, in a sense, I guess they saved me. My family was poor and novels gave me the impression of infinite possibility.” And, likewise, Richmond Hew, the corrupt conservationist and Béchard’s literary double, was changed, and he glorifies the effect of American novels to their extreme, most realized end. He tells Béchard, “I read Jack Kerouac when I was I kid. After that, each time I struggled to give myself permission to act on my desires, I picked up On the Road… Kerouac was the freest white man in the world.” He explains by describing, with reverence, the unrestrained pleasure and sport Jack Kerouac took in “capturing” (i.e. fetishizing, raping, exploiting, attacking) the bodies and experiences of any Other he encountered (i.e. black people, gay men, Mexican prostitutes, and women.) Although the fictional Béchard sees himself as ideologically and morally opposed to Hew, the authoring Béchard draws subtle yet unmistakable echoes between the two men, revealing their shared heritage of literature and white fantasies. Béchard even makes himself a literary double out of Jack Kerouac, who is perhaps America’s most famous eponymous character.

Though White makes good on Heart of Darkness with slashes of violence, surreal psychodrama, and an unforgiving excavation of the colonial mind; the novel may also test the reader’s sense of trust. It remains, to me, confusing whether an author who renders his eponymous-self so flawed and untrustworthy is then himself virtuous, self-sacrificing, and trustworthy or equally dubious. And I wonder if this ambivalent tight-rope-walk — that Béchard never does tip himself over to the clear side of safety and absolution — is something to credit. Considering that this novel, which is so thoroughly concerned with inherent racism and whiteness, is written by a white male, this question will, and must, snag, deter, and raise speculation among its readership. However, if white authors should, necessarily, attempt to participate in the exposure of whiteness and the dismantling of white power, Béchard attempts in White are taken with as much self-awareness, intelligence, and as little hubris as possible within the Western novel’s ever-compromised artifice. The ending leaves Béchard, and the reader, nowhere clean and tidy.

Michelle Gottschlich is a poetry MFA candidate at the University of Virginia. Links to her work can be found at michellegottschlich.com.
PrevPreviousA Conversation with John Keene
NextReview: Lynn Martin’s ShiverNext
MASTHEAD