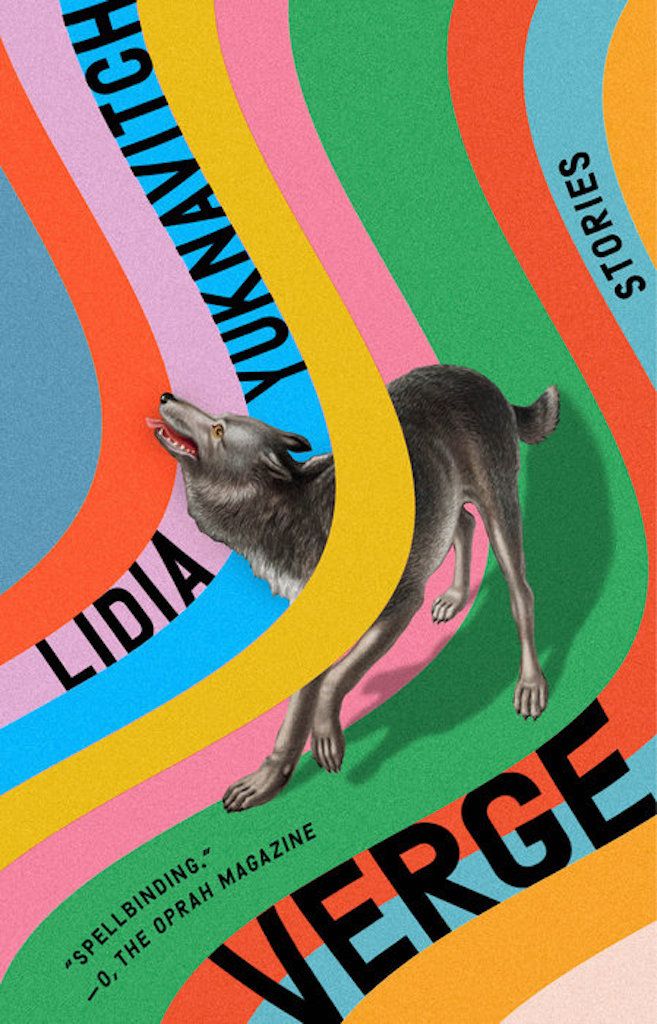 “…I wrote story after story. There was no inside out. There were words and there was my body, and I could see through my own skin. I wrote my guts out. Until it was a book. Until my very skin made screamsong,” wrote Lidia Yuknavitch in her 2011 memoir The Chronology of Water. There are twenty stories in her forthcoming collection, Verge, and all of them are “screamsongs.”

I read The Chronology of Water for the first time when I was sixteen and hated my body. I carried the book around with me like a Bible. I remember thinking, I didn’t know this was allowed. By this, I meant: messiness, queerness, rage, grief that is uncontainable. When Garth Greenwell reviewed The Chronology of Water in the New Yorker in 2015, he quoted Hélène Cixous: “Such is the strength of women that, sweeping away syntax, breaking that famous thread…women will go right up to the impossible.”

In Yuknavitch’s own words: “I am a wrecker and maker of wordhouses.”

Verge, too, “goes right up to the impossible.” But instead of rupturing syntax and diction as noticeably as her earlier works, Yuknavitch uses gesture. Her characters handcuff themselves to beds, they punch people at parties, they ask their sisters to artificially inseminate them. Verge portrays (imagined, yet plausible) bodies that are oppressed, in pain, and full of rage. Even the United States becomes a body that is “weird and deformed… stitched together from a brutal and bloody beginning, still straining against their sutures.”

This book asks its questions through the body. A story mid-way through the collection (page 77), called “Second Language,” investigates the world of “a living dead girl,” a girl with “no name or documents” who is trafficked in Portland, Oregon. Yuknavitch writes,“ And what were her ex-posed capillaries and dangling entrails compared to the wallets of businessmen jutting from the asses of their fine suits.”

Verge asks: how do we encounter the social systems that have oppressed, enabled, and disappointed us? How have we participated in them?

To address these questions, we must examine the “girls who make transactions toward life away from death,”; “the monkeys beaten and tortured,”; the “skin gray and full of puss.” These stories ask us to enter a world of immense physical suffering with characters who are not passive or subtle about their expression of it. In “A Woman Signifying,” a woman “touches her cheek to the radiator for three long seconds” after her (husband, boyfriend, partner?) says, “I’ll be working late again tonight, don’t wait up for me.” Instead of “going on a diet-herbs and tofu,” like her friends suggest, the woman makes “an amazing wound.” “He’s not the only one who can play this game!” the woman says.

In “How to Lose an I” a man who has been in accident examines his false eye in “a hotel glass filled with saline solution” and of course, “it looks back.”

In “Cosmos,” a man builds a city out of trash found on the floor of a planetarium and learns from a gruesome item he finds: “there is no life without death.”

The titles of these stories, like the stories themselves, are not shy in pointing at what they narrate: “A Woman Object (exploding)”; “A Woman Refusing,”; “A Woman Apologizing.”

Though Verge is full of brutality, its characters are still capable of feeling pleasure and experiencing moments of light. In other words, hope is allowed to exist here. “It is possible to carry life and death in the same sentence,” Yuknavitch wrote in her memoir, whose paradox Verge at-tempts to see through in pieces like “Pull,” the first story of this collection. A young girl swims away from “a broken country” and eyes an impossible distance. Still, “what looks terrifying, like a choice to drown, to the others on the boat—seems absolutely possible to her.”

Even when Yuknavitch renders violence with her sharp, surprising prose, it co-exists with re-minders of “skin and sun and good dirt,” “heaven on earth,” “hot coffee between palms,” and “birds moving from the dull land to the winged sky.” These “absolutely possible” moments, the brave girls of this book, make its more excruciating moments bearable—moments like in Verge’s second story, “The Organ Runner,” where I learned how “Anastasia Radavic’s entire left hand was grafted to her ankle, just above her foot” for six whole months. “She never forgot how it looked growing from her ankle.”

Neither will I, and neither will I forget any of the characters in Verge or their wild, extreme gestures. In 2020, these portraits of pain seem to be a radical call to consciousness, for how can we be compelled to act without feeling first? Finishing this book, I looked down at my hands and thought: “I have hands.”

It is no secret that language is written or spoken or screamed or signed, with our tongues, vocal cords, mouths and fingers. Every story, in some way, begins and ends with(in) the body.You have a body, Verge says again and again. What will you do with it?

Raisa is a poetry MFA candidate at the University of Virginia. You can find more of her work at www.raisatolchinsky.com
PrevPreviousReview: Baron Wenckheim’s Homecoming by László Krasznahorkai
NextQ&A with C Pam ZhangNext
MASTHEAD