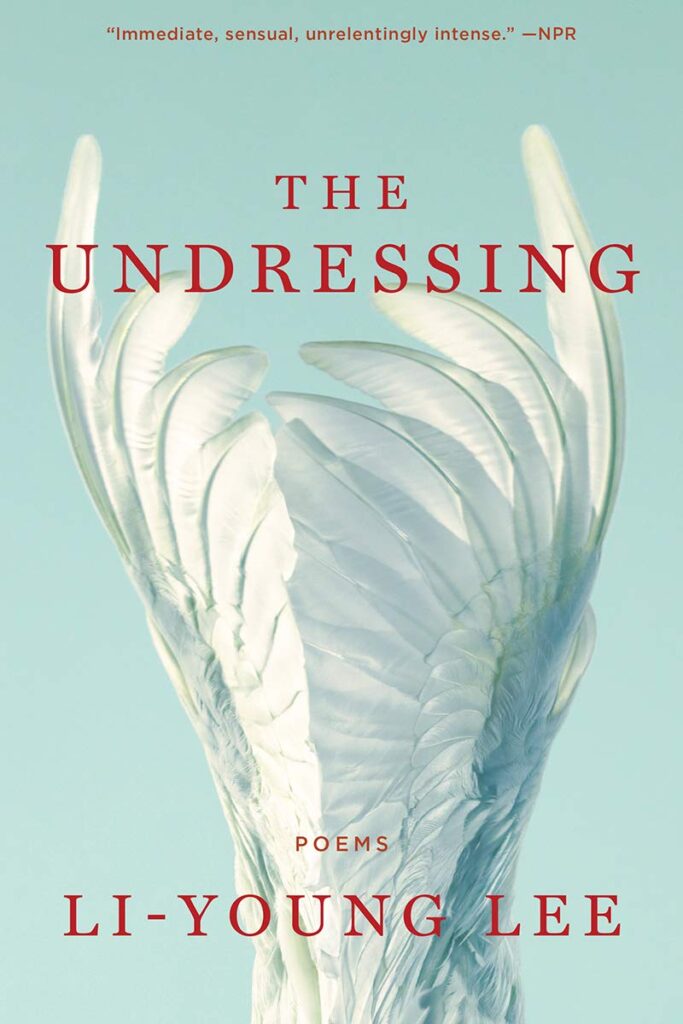 Review: The Undressing by Li-Young Lee

In a 2007 interview with Tina Chang, for the Academy of American Poets, Li-Young Lee, speaks to the the poem’s genesis as inseparable from the rhythms of human nature, and from world itself: “There’s no way to account for any thing or any event. If you rigorously dissect it, you realize that everything is a shape of the totality of causes. What’s another name for the totality of causes? The Cosmos. So everything is a shape of Cosmos or God. It feels like something bigger than me—that I can’t possibly fathom—but am embedded in.”

In Lee’s brilliant fifth collection, The Undressing, the poet makes room for the voices that make him and the voices that threaten to annihilate him. In the thirteen page title poem with which the book opens, Lee transforms the voice of the beloved into that of the universe, that which is wholly uncontainable. “Listen, / she says,” as the speaker begins taking off her clothes. “There are stories we tell ourselves, she says. / There are stories we tell others. / Then there’s the sum / of our hours / death will render legible.” As the undressing continues, our speaker gets closer to the beloved’s nakedness, her voice near-biblical, becoming one that is simultaneously intimate and prophetic. She speaks for fire, water, light. She speaks for her own body, which is the world. To even have a voice, the poem tells us, is to contain more than ourselves: “We’re just passengers of our voices, / a bird in one ear crying, Two! / There are two worlds! / A bird in the other ear urging, Through! / Be through with this world and that world!”

Throughout his career, Lee has welcomed those forces that are bigger than the self—God or the Cosmos, nature, love, desire, whatever you name it. In his first collection, Rose, we encounter a poet who, in his longing for his dead father, has given himself over to such annihilation. From “Rain Diary”:

I want the rain
to follow me, to mark me
with a stripe down my chest and belly,
to darken my skin, and blacken my hair.
I want to be broken,
to be eaten by anonymous mouths,
to be eroded like minutes and seconds,
to be reduced to water
and a little light.

Now, thirty years later, Lee inhabits the voices of what threatens to annihilate him. “The Undressing” ends with these lines, spoken by the beloved:

You thought my body was a tree
in which lived a bird. But now, can you see
flocks alive in this blazing foliage?
Blue throngs, green multitudes, and pale congregations.
And each member flits from branch to living branch.
Each is singing at different amplitudes and frequencies.
Each is speaking secrets that will ripen into sentence.
And their voices fan my fragrant smoldering.
Disclosing the indestructible body of law.
Ratifying ancient covenants. Establishing new cities.
And their notes time the bidding
of your own flowering.
Die now. And climb up into this burning.

In that same interview from 2007, when asked about writing toward the areas of the self that have yet to be explored, as a poet entering his fifties, Lee says: “I do feel that, as a yoga that one practices, writing poems is like any meditative path. You move through your own psychology, and then you move beyond your psychology. At that point it gets a little rough, because you have to posit something beyond your own psychology toward that which your psyche is embedded in. That adventure is, I think, an infinite proposition. That, to me, is the real wilderness. Beyond species-specific, beyond gender-specific, beyond culture-specific, what kind of poems are your cells writing? What kinds of poems come out of the space that is our bodies?”

In The Undressing, Lee is in full communication with his own psyche and the wilderness that lies beyond it. In “Our Secret Share,” Lee narrates a fractured family history, moving across decades and continents. The poem offers us vivid details of Lee’s own life and his sibling’s lives, moments we’ve encountered in some way or another, in his previous works. But here, he presents them so intimately, they feel as though they are gifted. We see Lee, waiting for his sister to cross a river in Indonesia, a journey from which she never seems to arrive. We see him as a child, visiting his exiled father in prison, watching his mother slip a bar of soap past the guards. In a startling prose passage, we hear from Lee’s brother, in his own voice, recalling how he narrowly escaped a student mob: “I guess by then they must have begun stabbing her, I mean, when her son later found her, she was full of holes, her body sticky with blood and gaping wounds.” “Funny,” he writes, “the thoughts that return to keep us from sleep.”

Throughout the poem, Lee explores memory and migration, how we are bound to our family, even across unbridgeable distances, and how we can enter those distances, like absence and silence, and turn them into spaces of understanding, of healing, without turning away from their tragedy. Lee writes:

My mother lives in possession
of one part of something unspeakable,
the other part of which
I keep, her gift to me. And as long
as what she won’t say
and what I’ll never tell
remain our secret share
of the world’s unread history,
the unspoken weds the unspoken,
face to face in the silence between us,
and both our hearts knit
to remain intact,
and both of us will have to wait
until we’re alone to weep.

It often feels like Lee is constructing a chorus through these poems, that his accumulation and blurring of voices, acts to move toward some kind of unity that is at once totally larger than the self, but of which the self, as Lee describes it, is absolutely embedded in. The effect of this is startling, even overwhelming at times. The poet A.R. Ammons once wrote “Touch the universe anywhere and you touch it / everywhere.” Lee’s poems in this collection seem to be doing just that. Every part of Lee’s poetic universe feels as if it were part of the map of his own body. Everything, as hard as he tries, leads him back to himself. In “All About the Birds,” he writes:

The poem that comes next, the collection’s penultimate poem, “Changing Places in the Fire,” returns us to the voice of the beloved, the speaker’s muse, who is also the universe. Though here, she has grown angrier, stranger, brimming over and becoming more and more uncontainable: “What’s the Word! she cries / from her purchase on the iron / finial of the front gate to my heart.” Over the poem’s fifteen pages, we witness the poet’s violent, aching struggle with this shifting figure—timeless, wrathful, desperate, and tender, still—to find “The Word,” that which might, if anything, have the ability to save us. This “Word” is as difficult to render as the figure to which the speaker is responding. In one moment: “Word is // armed squads raping women by the hundreds. Word is / beheadings, public lynchings, and riots. Word is / burning, looting, curfews, and shoot-to-kill-orders.” And in another moment:

It is a brother and sister
telling each other
the missing parts
of one another’s stories.
It is the lover and the beloved
changing places in the fire.
[…] It my hand moving over your body, I say,
finding more and more to know.

By the end of the poem’s tireless, relentless searching, we begin to approach the place where the collection started: “The body of the beloved / is the lover’s true homeland, she says.” And in the poem’s final pronouncement, our speaker says:

And of all the things we’re dying from tonight
being alive is the strangest.
Surviving our histories is the saddest.
Time leaves the smallest wounds,
and your body, a mortal occasion
of timeless law,
is all the word I know.

And so, Lee leaves us—after all of the violence, the history, and language itself—with a simple gesture of touch, a return to the body that is, and will be, continually threatened. Yes, there is so much in the world that is beyond our control, there is so much that threatens to destroy us. But we are here, aren’t we? I can’t help but think of Keats in that moment, a hand reaching out from the page: “See here it is— / I hold it towards you.”

Michael Dhyne is a Henry Hoyns fellow in the University of Virginia’s MFA program where he teaches poetry and was awarded the Academy of American Poets Prize. Recent work has appeared or is forthcoming in The Adroit Journal, Fugue, Sonora Review, and Washington Square Review.
PrevPreviousReview: The World Goes On by László Krasznahorkai
NextReview: Double Portrait by Brittany PerhamNext
MASTHEAD