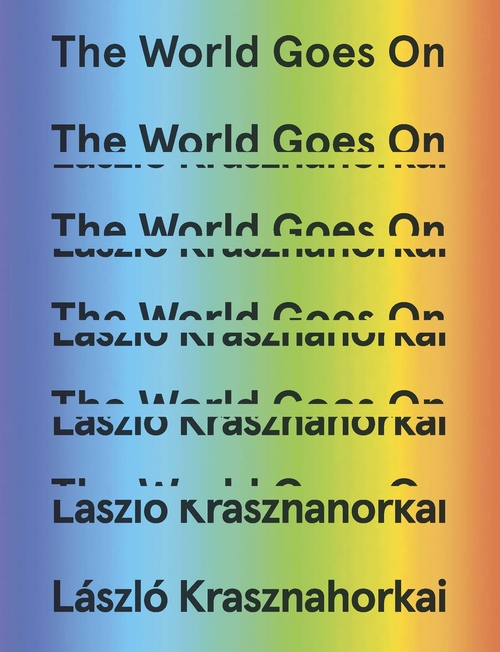 The World Goes On
by László Krasznahorkai
New Directions
December 5, 2017

Review: The World Goes On by László Krasznahorkai

A deep, unsettling current runs through the work of Hungarian writer László Krazsnahorkai. His prose simmers and threatens, never reaching for brutality yet somehow arriving easily on the doorstep of the apocalyptic. For him. the story is in the sentence, and his sentences stretch on and on, meandering across pages and moods, shifting through phases, at times whimsical, at others frightened or melancholic, but always moving relentlessly onward. In this collection—or work, or whatever you want to call it—the sentences, at times encompassing entire stories, capture the relentless, wandering, and displaced movements of our own consciousness. When one ends, it often concludes with a death, such as that of the researcher in “That Gagarin” or the imprisoned lecturer in “Universal Theseus.” There’s echoes of Thomas Bernhard and Bohumil Hrabal here, though Hrabal quit his single-sentence book Dancing Lessons for the Advanced in Age after a hundred and ten pages (in the NYRBooks translation)—while in this book, unlike his quick one-two punch Herman and the Wolf/The Last Woodsman, Krasznahorkai pushes for a challenging three hundred and fifty.

A reader willing to commit to the project of reading this book will inevitably be rewarded. It is exciting not only in its novelty but in the breadth of what this form can capture. It’s worth noting the most of the most profound moments come in the book’s second section, “Narrates,” when the books moves into what might be more traditionally recognized as stories (if you’re looking for them). Meanwhile, the first and third sections, entitled “Speaks” and “He Bids Farewell,” imply that a single entity/narrator (Krasznokorhai himself?) is in control of the shape of the book. The Speaks section lays out the concerns of the book, the near-impossibility of attempting to escape from the confinement of one’s own existence. In “Narrates,” there are characters in a world like ours: a translator in Shanghai, a laborer in Spain, travelers in Varanasi and the Ukraine. The form allows for a sense of the surreal, and things are not going well for these characters, doomed and abject as they are. The stories riff on melancholy, stasis, the whole and the part, loneliness and connection, the passage of time and life—all that good stuff.

For all its high themes, there are moments of wonderful humanity—Yuri Gargarin, alcoholic and banned from space travel, wanders Soviet Star City, preaching of the paradise that was the void of space:

…clearly he lived his days in wretched drunkenness, and clearly a great shadow was now cast over him, and in this great shadow his family life could have fallen into ruin, there was Valentina Ivanovna, there was Galya and Lenoshka, but he just drank and drank until he fainted, and all the while he spoke and he spoke and he said and he said what he had to say to whomever happened to turn up in his path, from Tyitov to the cleaning staff of Star City, so that finally they would understand that what he was saying was nothing bad, so that they would understand already that what he was talking about only meant the greatest possible good for all of humanity, because what he had to say was that there really is a Paradise…

And so on. There are also moments of humor, sometimes even slapstick, if you can catch them: the imprisoned lecturer in “Theseus,” for instance, not yet aware of he’s been captured and confined, stands at his lecturn and asks “How are we doing with that door.” These stories are presented in a seeming arc, with the early ones focusing on youthful escape, the middle paralysis or inevitable return, and eventually arriving at emptiness: seventeen blank pages, followed by notes referencing the missing text. This, it seems, is the void and its vestiges, the inevitable relief from our troubles.

It’s an impressive, demanding work that speaks of an obsession with what bugs us throughout life, and why we might press on with life at all when we know that apocalypse of our own end is inescapably bearing down on us. “I would leave here the exit routes, the evenings in the kitchen, the last amorous gaze…gravity, hope, enchantment, and tranquility…” announces the book’s narrator at the very end, “because I’ve looked into what’s coming, and I don’t need anything from here.” It’s middle-fingers up at the tombs of the ancients, stuffed as they are with golden jackals for the next life; we’re heading for the same nothingness from whence we came.

Adam Roux is the current editor of Meridian.
PrevPreviousReview: Because Everything is Terrible by Paul Guest
NextReview: The Undressing by Li-Young LeeNext
MASTHEAD