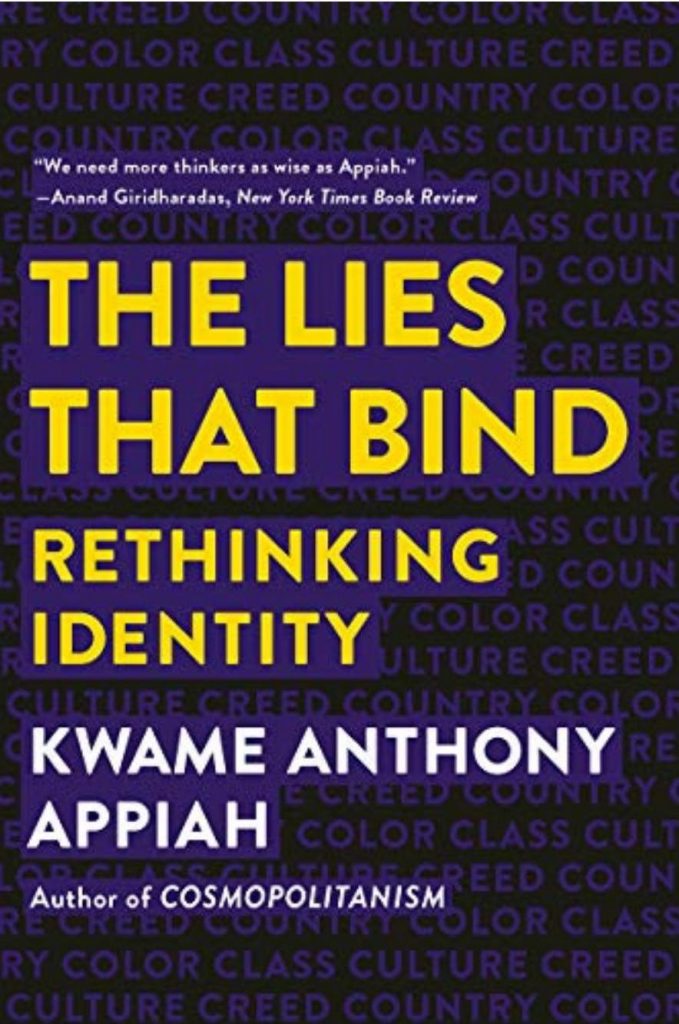 In 1891, in an essay entitled “The Soul of Man Under Socialism,” Oscar Wilde wrote these words: “‘Know thyself’ was written over the portal of the antique world. Over the portal of the new world, ‘Be thyself’ shall be written.” Alas, the “new world” Wilde dreamed of is yet to appear. More than a century later, we’re still trying to know ourselves. Indeed, identity is the chief fixation of our time, and in its philosophical pre-eminence cleaves to all things: the war on terror, the war on drugs, sexuality, astrology, makeup. In The Lies That Bind: Rethinking Identity, Kwame Anthony Appiah zooms in on five: Creed, Country, Colour, Class and Culture. In roughly 200 pages, Appiah attempts to launder these identities of our commonly-held-assumptions. Because rather than illuminate, Appiah argues, these assumptions contaminate.

In the name of ridding us of our sludge of fictions, the writer asks us to re-approach one (religion), and to kill and bury the rest (nationalism, class, race and western civilisation). His arguments are convincing in part because they are so thorough. And they are thorough because they are backed by his knowledge and erudition. Appiah is a prominent philosopher, a professor at NYU. And it is out of the vale of his knowledge that he pulls little-known figures: Italo Svevo, the Jewish-German-Italian writer; Amo Afer, a philosopher from the Gold Coast; Publius Terentius, the Roman-African playwright. He does this in order to show us how even those of long ago defy our expectations of identity (and how we therefore ought to question both the provenance and verity of those expectations). This is one of the pleasures of reading this book: waiting to see what interesting figure Appiah burnishes from the surface of history, even if it’s to (kindly) chastise our thinking.

It is not a coincidence that special knowledge is, these days, being dismissed (think of Michael Gove’s absurd pre-Brexit utterance that Britain had had enough of experts; or Trump’s attempt last year to delegitimize a federal judge). Knowledge is power. And ultimately, Appiah is trying to empower us to move away from the essentialist thinking that has contributed to various ills, including the reprise of populism around the world. One by one, the essentialist arguments that are so common today fall. When we’re shown that the purity of genesis that nationalism presupposes is a lie, then we can only conclude that nationalists are to be ignored, not elected. If culture is something to be practiced more than merely something to be claimed, then many who claim “western civilisation” and its values would suddenly find themselves exiled from that territory. In his quest to be thorough, Appiah goes further still: “Western civilisation is not at all a good idea, and Western culture is no improvement.” The global right would tear this book apart.

But Appiah’s dismissals are not only reserved for the follies of the political right. In fact, he spares no one. In the final pages of the book, she who decries cultural appropriation will find herself under Appiah’s glare, for he asks her to “resist using the term ‘cultural appropriation’ as an indictment.” Similarly, the man who is anti-religion will learn that, ironically, his arguments are tainted by the very same assumptions that doom the fanaticism of those on the other side.

Appiah is right to do this, to show us how wrong each of us, no matter our colour or creed or political orientation, can be. But the temptation to illustrate equivalences can bind you to a simplistic model that doesn’t aid reality (and I think this is ultimately what the writer wants to do). We see this when Appiah deals with race. Race, he says, is a biological canard. White people do not share a particular genetic essence. Neither do black people. This is certainly true. But Appiah goes on to ask us if “we might not be better off if we managed to give up our racial typologies.” There’s a particular school of thought that has made this their mission: the academy of the color blind. Its students “don’t see race.” The problem is, they also don’t see racism. In their minds, racism is merely the acknowledgement of colour. Ergo, to stop acknowledging colour is to stop being racist. But as we know: racism is not what happens when difference is acknowledged, it is what happens when that difference – for whatever reason – is weaponized. You can see here how the body of Appiah’s worthy argument bumps into the wall of reality. Discarding race is a fine idea in theory, but in reality there are several steps between a world in which race-based discrimination is common and the world that Appiah advocates, in which “color is merely a fact, not a feature and not a fate.” The latter is not the immediate remedy for the former. Appiah– an American of English and Asante descent – is surely aware of this, yet he leaves it left unsaid. Strange for a man so thorough.

Quibbles aside, it ought to be pointed out that part of why Appiah bothers to be thorough is because he truly cares for all of humanity. And his care casts a nourishing shimmer upon this book. The Lies That Bind works hard to reveal the problems at the heart of our beloved identities and the battles we wage in their name. By and large, that work pays off. The gift of this book is in its timely reminder that it’s possible to be wrong about what you think you know best. In a time of fierce certainty, this is one truth we need.

Khaddafina Mbabazi is a musician and writer. Born and raised in Uganda, she now lives in Charlottesville, Virginia. She writes about memory, love, and the hardware of African lives. She is currently an MFA candidate in fiction at the University of Virginia.
PrevPreviousReview: Witch Wife by Kiki Petrosino
NextReview: An Untouched House by Willem Frederik HermansNext
MASTHEAD