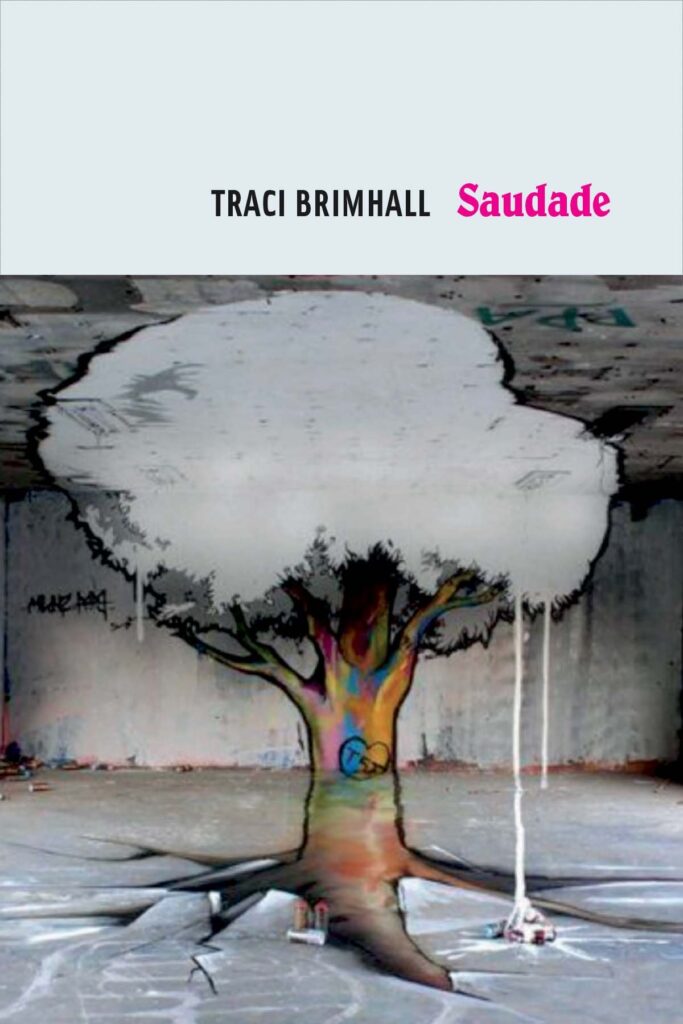 Traci Brimhall’s third full-length collection of poetry Saudade begins with an impossible translation, the title being the Brazilian Portuguese word saudade which doesn’t equate perfectly to a single word in English. Saudade is like a profound longing, and so, before her first poem begins, Brimhall already gives something away about the shape of the book, or the shape it will make, that of a word opening wider, like a mouth— translation, simile, a definition, or rather, a history revised.

The structure of the book, what receives this shape, is a family tree. Entering a new section we return to the family tree. It’s beautiful, surprising even, to encounter the visual in a book of poetry— the tree is black and white, the wide trunk smeared as if with water, or a hand, blurring what’s been carved into it, what appears to be initials in a heart. Though visually, the book is not exactly a descendent of William Blake’s Songs of Innocence and of Experience, as the tree seems more like a momentary mapping and less of an illustration, the way in which Blake received the idea for the print seems aligned with Brimhall’s project— Blake claimed that his recently deceased brother came before him, speaking of the printing method— for the dead are always speaking in this book. In the foliage of Brimhall’s tree the names are added as we read further, as if we are to follow a family growing backward, back though time. And we do. The experience is something like being led, and though the book grows dense the further back we go, dense with voices, the book is full of revelations. In these powerful persona poems we find poems which announce themselves to be not only voices but bodies too.

Brimhall, through this family’s mythology, introduces us to Puraquequara and a cast of women and men who have lived there, along the Amazon River, and through Brazil’s political and socioeconomic history, including the 1964 coup d’état, the rubber boom. These poems for all of their wildness and the associative leaping, like that of memory itself, feel acutely ordered thanks, in part, to Brimhall’s use of form. Maria José who has the most pages of all the voices in this collection, speaks, descendent perhaps of Dante, in tercets, whereas Thomas speaks in a single stanza, Sophia has her couplets and Don Antonio’s single stanza varies from Thomas with staggering lines. Throughout these sections, the chorus of many Maria’s breaks out in its own form like that of a script, a play. In one of these poems, “In Which the Chorus Provides a Possible Chronology”, Brimhall writes “We sing history in reverse so the story might end in birth”. Isn’t this the dream of poetry? To uncover one voice and find another beneath it and another beneath that, and so on? Or aptly phrased by Brimhall, isn’t a poem history singing in reverse?

Maybe it’s a sign of a good book, or better, an argument for why this book but the net that Brimhall has cast is so wide and so masterful that to review, to condense, is to come up short. In the shortest poem of the collection “At Play in the Fields of the Lord” Brimhall writes:

… A fact is a thing
of intimacy. A god is mere hypothesis. A mother is
a grief. The rotted body of a horse is a home for an eel.

It is Maria José who is speaking here and, like other voices in Saudade, she has something to tell us. I think to say a poem has urgency is obvious because of course it does, why else was it written, but there is something similar to urgency, tonally, in all of these voices— a register like that of a prophet or a parent who has lost everything, both perhaps. Each poem, with lyric grace, does the work of defining— “the rotted body of a horse is a home for an eel”— what later in the collection becomes redefined by the past. The beauty is perhaps in this withholding, it’s as if Brimhall has, all along, been posing questions that aren’t revealed to us until we realize that they we are holding, temporarily, in our hands, one answer. For example. in “The Hunger River”, later in the collection, Don Antonio speaks of shooting his horse who has followed him into the river and what becomes of the body. Brimhall write “an eel made its home/ in the ribcage, flicking its black tail between the bones” and we remember.

Michaela Cowgill is an MFA candidate in poetry the University of Virginia.
PrevPreviousReview: Houses of Ravicka by Renee Gladman
NextReview: The Vanishing Princess by Jenny DiskiNext
MASTHEAD