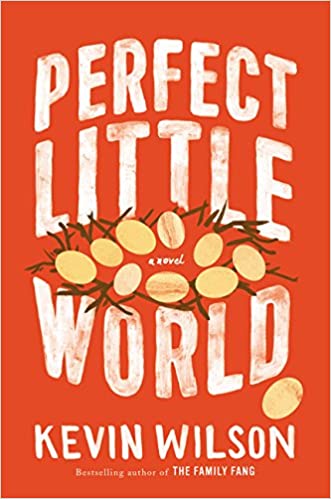 It starts simple: Izzy has just graduated high school and is pregnant with her art teacher’s baby. She lives with her alcoholic father and makes $13,000 a year smoking barbecue at The Whole Hog. The art teacher’s wealthy mother, desperate to maintain her family’s reputation, offers to help make the situation disappear.

In another writer’s hands, this novel would continue along its expected trajectory: teenager struggles with the reality of pregnancy, teenager learns Important Life Lessons, teenager and her father learn how much they truly love each other. But this is not a normal novel; this is a Kevin Wilson novel.

The baby’s grandparents get Izzy entered into a new psychological study, called “The Infinite Family Project”, or IFP. This study is the brainchild of Dr. Preston Grind, who epitomizes everything there is to love about a character created by Kevin Wilson:

Dr. Preston Grind was the son of Drs. Stephen and Wendy Grind, two of the most famous child psychologists of the 1980s and 90s, specializing in childhood trauma. Their son…became the initial subject of what became known as the Constant Friction Method of Child Rearing…Instead of being swaddled and kept warm in a crib, Preston would randomly be removed from his bed at various times during the night and placed on the floor, the temperature adjusted to make sleep uncomfortable. Regular feeding times were discouraged and sometimes meals lasted mere seconds. As Preston learned to crawl, weights were attached to his ankles.

Dr. Grind. at the age of three, was expected to learn how to pick the lock on a pair of handcuffs. His parents bought him a dog and then took it away, just to see how he adjusted to the stress. It’s no wonder, then, that the study Dr. Grind grew up to create revolves around continual love and affection. Ten families will communally raise ten children. There will be no favoritism. One of the children will be Izzy’s son.

Although this idea of communal living, of families of choice, interrogates our ideas of parenthood, the novel seems most concerned with the difficulties of adulthood. The two characters at its heart, Izzy and Dr. Grind, are two of the most fundamentally lonely creatures in contemporary literature. “Happiness,” Izzy reflects in the opening pages, “was small and quiet and you expressed it when no one else was around”. Of course Izzy and Dr. Grind are drawn to each other. For them, more than anyone else involved in the IFP, it’s the only true family they have ever known.

This is not a perfect novel. Although it makes sense that Dr. Grind and Izzy are obsessed with the idea of an “infinite” family, the reasons for other characters engaging in the project never quite materialize. The first third of the book is dedicated to nine months of Izzy’s pregnancy and then ten years of the IFP are raced over in 200 pages. But these flaws don’t impact the joys that are to be found inside this book. Wilson fills its pages with pure delight—a detailed description of how to properly barbecue an entire pig, a community of houses built on astro-turf, a ventriloquist dummy named Tenny C. Of course there’s humor, too. In one scene, a woman living on the commune publishes a novel about a rich orphan who hires actors on craigslist to replace her entire family. (The woman ends up falling in love with and marrying the actor that plays her brother). But beyond the humor, Perfect Little World is full of vibrancy and quickwitted insights into the human condition. It understands our endless need for family or, as Izzy puts it, “to be on a team, to be part of something, so that she could say, ‘I’m scared,’ or ‘this hurts,’ and someone who loved her would reply, ‘I’m scared, too,’ or, ‘it will be over soon’”. Who hasn’t had a thought like this at one time or another? Who hasn’t wanted family to become something infinite?

No, the novel is not perfect. But it is a very daring novel. It dares to imagine a cure for loneliness.