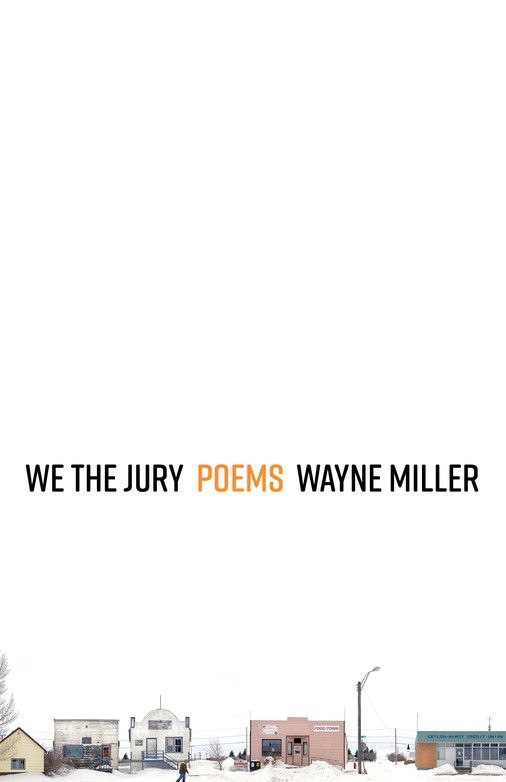 We the Jury: Poems
by Wayne Miller
Milkweed Editions
March 9, 2021

Review of We the Jury: Poems by Wayne Miller

In his September 20, 1973, review for the New York Review of Books, Stephen Spender opens, “Poetry is nothing unless it is the breaking up of routine attitudes toward living. There is therefore something sad about reviewing it.” I keep Spender’s review stored on my computer desktop—the very machine on which I’m writing now. I’ve saved it to remind me of—what? To keep going?

Language travels within the vernacular upon a beveled slope of meaning, sometimes riding right for us, at other times slipping nearly off the rim of recognition. Last week, when I substitute taught at a local junior high school—donning my mask, keeping the students apart apart apart—I found myself busily Googling the word “purple.” I had asked one nonchalant and swaggering lad how it was going to which he unglancingly replied, “Purple.” This I love. I looked it up to learn that purple, besides its royal connotations, now refers to (if I may boil this down for a minute) happy feelings, strong cannabis, or certain sexual positions. I made my choice what the kid meant.

Two words more unfortunately abstracted in recent American discourse have been “body” and “space”—what and where we are. I first noted these evolving abstractions while living overseas, in Belfast, Northern Ireland. From that vantage, I found it difficult to understand why Americans were constantly referencing bodies and spaces; it did not occur to me to join these words with American tragedies of the recent decade. I offer such an admission for a purpose: to argue that American disregard for persons is palpable, grievous, tragic and should not be abstracted by language. Neo-colloquialisms like “body,” “space,” and ending every sentence with “right?” risk jargon and the more tragic loss of what they mean to save or reclaim: safety, security, and even beauty.

But this is a poetry book review, not a diatribe. I mention this only as an example of language on the downward slope of meaning.

Wayne Miller is a poet of the historical surreal. His new book, We the Jury (Milkweed, 2021), hovers over traditions in a positively American strain, knowing when to reach down and in. The historical is an emergent subject in poetry written in the United States, and Miller’s focus maintains a Whitmanian mode of attention. Employing terse, spare diction, these poems look at America without symbolic attachment, choosing instead to make symbols of their own.

Miller has published four previous books of poems, and in each of them cuffs abstraction to the chair and flips the flood light on. From The Book of Props (2009) and The City, Our City (2011) to Post- (2017), readers have recognized in Miller’s lyric voice a stern, contrary and sometimes bare poetic transformation that serves his treatment of history. A child’s voice becomes the lights in the house coming on at night. A textbook holds bullets after civil unrest. Miller is a poet of the god of history, the often-wrathful god who knows our sins. In We the Jury an American middle class, and the question of reading our own history, is purged of a nostalgic sublime in lyric poetry that foregrounds the culpability in ourselves and our systems, in our bodies and spaces. We are the jury, and we are taken to task.

The book opens with the mea culpa “On Progress” in which the speaker’s “grandmother attended the last public hanging / in US history.” From the outset, the reader is audience to a straightforward diction, an Anglophone plain style, and the logic of syntax. Here are the opening tercets to “On Progress”:

My grandmother attended the last public hanging
in US history, which occurred
in Owensboro, Kentucky, in 1936.

She joined the crowd of 20,000
to see Rainey Bethea—Black and convicted
of rape, theft, and murder—hanged

by the first woman sheriff
in the history of the state. […]

One of Spender’s “routine attitudes toward living” we might find in a contemporary poetry collection is a system of imagistic inundation, an inheritance from the digital screen. Miller, however, eschews heavily imagistic systems in favor of scalding flat statements of fact, building a poem—and, in turn, a book of poems—that make us face them. “On Progress” is composed of eight numbered sections, each of which recounts a historical execution until we acknowledge that “[the] crowd gathered for the killing / couldn’t be more human.” The speaker then addresses a “Child” to “look,” a verb that here does not stand in for listen but rather see: “we’re building a house.” Finally, we’re finished, and left reeling as “Air branches // and unbraces inside us, this laden air / that fills our time. Then / the floor opens and we never land.”

Nevertheless, here are tendernesses that uphold the American particulars. Domestic particulars, in fact. Lights in the backyard, lost glasses in the house, pre-Covid-19 gatherings with friends—the domestic realities of this century. American middle class are rendered as a drama rerum, a drama of things. The dramatic lyricization of American tangibles makes features in “Little Domestic Elegies” and “Love Poem,” or “Carillon”—where mobile phones keep “ringing // in the pockets of the living / and the dead.” In “Two Thousand Nine,” “Those months we were no longer / making payments we felt / as if the rooms would stay ours / just because we moved through them” until “the moment had foreclosed on us” and “we’d find a new moment to slip into.” Poetry can transform the imagination, and the kind of changes Miller offers are ones we might shy away from. But the book itself is brave, and it makes me feel brave enough to face even the griefs and losses I have yet to encounter.

There is no nostalgia in a Wayne Miller poem, the way there is no oxygen in space. And the reason is the speakers in these poems have seen the harm that comes from too lightly held beliefs. “The Rapture: A Sermon” personifies the collective first-person of “We, the elect” into a clinical and sealed off hubris the reader might recognize all too clearly.

We, the elect,
will be lifted

into the purity of our politics

whispering on their blankets
beneath the fireworks,

nor the lovers—
who fail to see

the primary purpose
of language. We’ll rise above

We’ll try to lift them
toward our righteousness

Longing for the sentimental present seems the particular American sin, and Miller’s voice weaves its awareness of marginalization, privilege, tragedy, and hope into a national culpability. Or, rather, a national greed, which seems both correlative to private possessive longing and analogous to that anathema nostalgia can become—our memories revised to truncate the sufferings of others.

Out my window, snow piles on each leaf of the mulberry tree. Down the slope of the yard to the dark street where the snow has been cleared, I see the meaning and melt of snow. It is Friday, the semester has begun, and I have spent the last two weeks thinking and talking and writing about poems.

Earlier, my wife had said, “It starts tomorrow.”

“Yeah,” I said. Then added, “What starts tomorrow?”

She was talking about the second impeachment trial of the 45th president of the United States.

Some say poetry and politics don’t comb out. This is a failure of imagination, one Miller ruffles the hair on.

We the Jury is both lovely and tender as well, particularly throughout the middle of the book with its domestic, marital, and familial negotiations of meaning. IVF, dead pets, watching TV—the props of the quotidian. Still, “It was raining in the capital, / and the nation’s new delight— // the war—was on.”

If there is an unrelenting tonal quality and diction to these poems, it is equal to the relentless onslaught in the mediascapes and ideoscapes of our increasingly globalized lives. Nevertheless, in these poems written at a brink, Miller puts our humanism on the line. Without giving too much away, the title of the collection’s closing poem finally names its speaker, our now-familiar narrator of history:  “The Humanist.” Miller lets us in as “he rose before the jury of his peers” on a day like today when it remains undeniably true that “The loneliest person on earth / is a humanist condemned.” This poet knows we will be judged, rightly or wrongly, and being a member of the jury does not get you off the hook.

Andy Eaton is the author of Sprung Nocturne, a pamphlet, and his poems appear in Copper Nickel, Narrative, Ploughshares, and The Yale Review, among other places. He is at work on his first collection of poetry.
PrevPreviousWe Were Happy
NextLavender SequenceNext
MASTHEAD