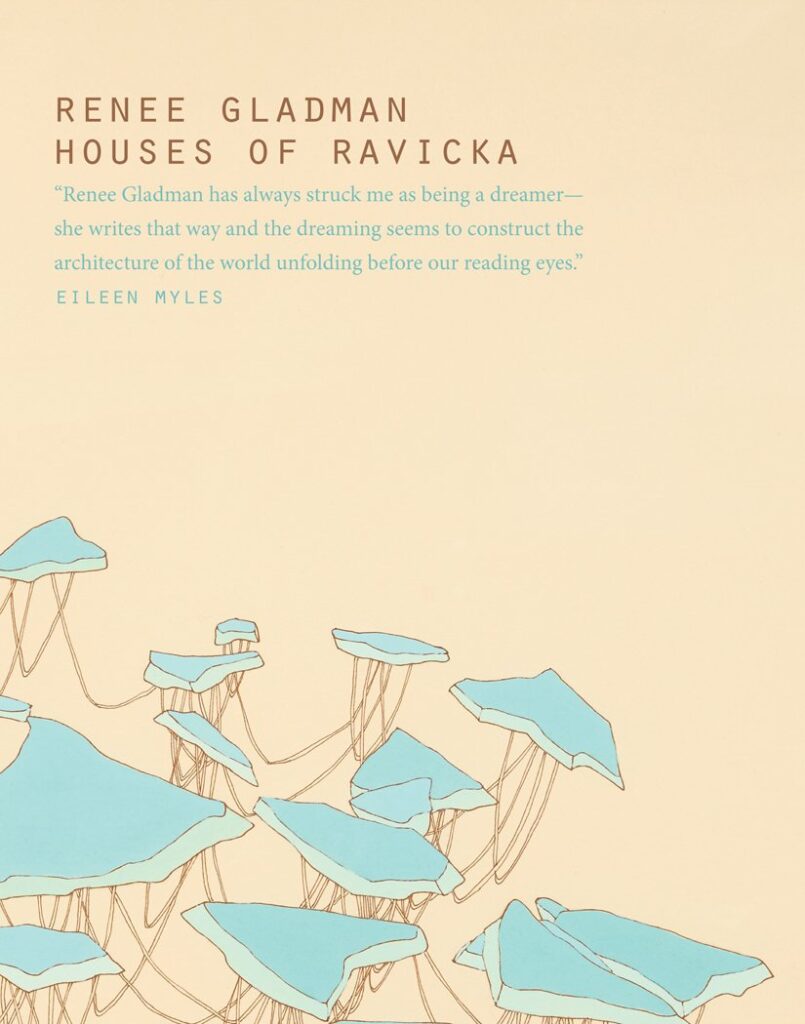 Jakobi is the Comptroller of the city of Ravicka whose job, as Renee Gladman lucidly explains in her afterword to the novella, is to “take geoscogs of the city’s buildings and houses…measurements that keep track of a building’s subtle changes and movements over time.” This peculiar job, like the city in which Jakobi carries out his duties, along with its unusual language and customs, is a magical invention by Gladman. For those readers who have read Event Factory (2010), The Ravickians (2011), and Ana Patova Crosses a Bridge (2013), which are part of the same series published by Dorothy Project, Gladman’s world will be a familiar one, and a happy one to return to. But even without reading these earlier novellas, it is a world that has been constructed convincingly by the author, and one which you will fall into willingly. Houses of Ravicka shows Gladman’s skill not only as a writer but an architect: using words, she builds an endearing city whose buildings, we find out, have an unusual quality.

Each building in Ravicka has an invisible counterpart, and the two are located in different parts of the city. Which takes us to the other important purpose of the geoscog: it supports the topographical alignment between a building with its invisible sibling. This process of mapping buildings has gone smoothly for Jakobi, up until the mysterious case of building No. 96. “My mission to locate and reconfigure spatial logistics for two houses that exist on the same parallel geoscog referential…was becoming evermore mysterious,” Jakobi tells the reader in the opening of the book. Jakobi found the invisible house, No. 32, in an area called cit Mohaly where it rightly should have been, but when he walked to Skülberg to find No. 96, its counterpart that should have been visible, he found that it was nowhere to be seen. How could this be? “You cannot have one without the other,” the reader is told. Something has gone wrong and, as the city’s Comptroller, Jakobi cannot stop until he figures out what happened to the missing building.

Jakobi turns to Triti for help, a woman who once held Jakobi’s title as Ravicka’s Comptroller, but who now runs a tea shop in the city. Her infusions and blends of teas are another of Gladman’s magnificent inventions. There is the “peckony” whose leaves are “delicate like straw” and have a “rich ember plate running alongside the veins,” whose flavour is best when combined with ginger and roasted rice. Or “Laughter’s Lament,” a tea infusion that is Triti’s speciality, and one which she drips into Jakobi’s mouth while he struggles to wake one morning, waking him up from a deep slumber after several “sips”. Triti is beside herself when she finds out that Jakobi is unable to place the geoscog for No. 96. She is sure she can make the geoscog herself, and she leads him out into the city, determined to solve the mystery. Yet Triti, to her dismay, hits the same conundrum that Jakobi has been hitting for weeks, and her fury explodes uncontrollably. “Triti! Triti!” Jakobi cries in an attempt to calm her. “What is the name of your new female tea?” Jakobi manages to quell Triti’s rage by questioning her about her teas, a topic that never ceases to enthuse her. Triti submits, unable to resist the opportunity to describe her eccentric herbal infusion processes.

There are many strange yet comical scenes such as this one in Houses of Ravicka. Like when Jakobi, overcome by hunger, decides reluctantly to go to the area of the city where all employees go for lunch, his least favourite place to go to. “To begin with, it is not really a place. It is a tent,” Jakobi tell us. “You even have to unzip a wall to enter.” But he has grown weary from the relentless search for No. 96, the pangs of hunger had become too strong. When he arrives at the tent, he is drawn – again, reluctantly – into a conversation with Boris Borinsky and Jadawl Mantaba, who join him at his table and proceed to talk at him for half an hour. Jakobi decides to bear the socialising, even though he finds it almost intolerable. “The meat was too tender to walk away.” When he eventually slips away from them, Jakobi, “let loose a little gas, as was custom, which they accepted with synchronized clapping as they walked away.”

The city of Ravicka is a loveable one and it seems, at times, so close to the real cities which we inhabit. Gladman walks us with Jakobi along the streets she has invented, down Hvarsaan and Czorcic and the Fallender hill, building with her words and narrative a complex city, but one that is so clear in the reader’s eye. In the book’s afterword, Gladman explains the concept behind Houses of Ravicka, which is to treat “the writing of books as an inhabitable architecture.” And, she succeeds in doing so. Ravicka never seems ephemeral, and its people and customs, although odd at times, are also endearing and relatable. Even the invisible houses have a tangible quality to them. In the second half of Houses of Ravicka, Gladman leads us into the invisible No. 32 and allows the reader a glimpse into the life of the person who lives there. “You are used to contradictions in Ravicka,” the new voice tells us. “You just hope to get the ones that allow you to go on making a life doing whatever it is you do.” In a beautiful, philosophical turn, Gladman reflects on her own task of building fictional cities through writing, questioning what we, as both readers and inhabitants, are willing to believe.

Cassie Davies is a writer and editor based in Charlottesville.
PrevPreviousReview: My Private Property by Mary Ruefle
NextReview: Saudade by Traci BrimhallNext
MASTHEAD