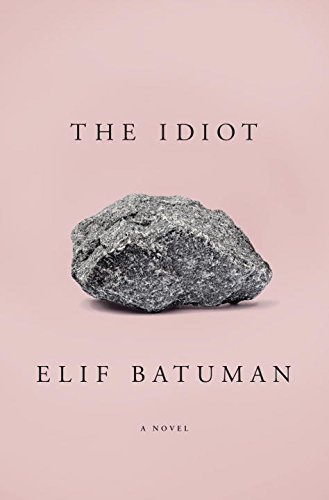 Review: The Idiot by Elif Batuman

Elif Batuman’s novel The Idiot can be described as a 432-page expansion of five pages from her first book, a nonfiction collection called The Possessed. In the novel, as in the essay, a Turkish-American Harvard freshman falls in love with a Hungarian classmate who secures the narrator-protagonist a summer gig teaching English in Hungary so she can visit him in Budapest; but in both tellings this Hungarian classmate has been concealing a girlfriend he has no intention of leaving. The narrators go to Hungary anyway, where at a summer camp they’re each asked to judge “an adolescent boys’ leg contest.” “I was given a clipboard with a form on which to rate their legs on a scale from one to ten,” Batuman writes, with a few words’ variation, in both books. “Nothing in my life experience or education had prepared me to judge such a contest.” Both narrators also canoe with the Hungarian love interest down the Danube from the outskirts to the center of Budapest. According to both books, “sixteen-wheel trucks glided by on barges.” Trucks aren’t allowed on Budapest’s streets on Sundays. Shortly thereafter, the love interest disappears to a math conference in Thailand.

In The Idiot his name is Ivan. The narrator’s name is Selin, Turkish for “the flood.”

Batuman has an enviable eye and ear for fertile weirdness, for those details that make the world interesting and moving but, tantalizingly, never determinately meaningful. In The Possessed Batuman applies a comedic compression to these moments; in The Idiot she expands and inhabits them. The sentences are shorter. The scenes are longer. Some conversations, with Ivan and with others, go on for pages.

Perhaps Batuman felt The Possessed never answered the question of what it all meant. This is not to say that The Idiot does answer that question. If anything The Idiot’s Selin understands less.

Selin is confused about everything. “In high school I had been full of opinions,” she tells us, but in college “meaning seemed to vanish.” On the first page of the novel she’s perplexed by the new technology of email. “I didn’t know what email was until I got to college,” she writes. “I had heard of email and knew that in some sense I would ‘have’ it.” It’s a note that deftly dates the action to the awkward adolescence of the digital age, that technological threshold already strangely difficult to reconstruct, overwritten as it is by our contemporary second-nature relation to email. So it is with past selves: they disappear with all their uncertainty. Just once, on the plane to Hungary, two thirds through the book, does the retrospective self comment from the present on the action of the past: “It can be really exasperating to look back at your past. What’s the matter with you? I want to ask her, my younger self, shaking her shoulders. If I did that, she would probably cry. Maybe I would cry, too. It would be like one of those Marguerite Duras books I tried to read.”

It’s characteristic of this novel’s deceptive guilelessness that the Duras reference might simply wash away in the tide of Batuman’s many absorbing details, since after all poor Selin understands nothing, having merely tried to read those books; yet at the same time the retrospective Selin draws a conscious line to Duras, who could be describing The Idiot in her own autofictional novel The Lover when she laments a particular photo never taken of her adolescent self:

It might have existed, a photograph might have been taken, just like any other, somewhere else, in other circumstances. But it wasn’t. The subject was too slight. Who would have thought of such a thing? The photograph could only have been taken if someone could have known in advance how important it was to be in my life, that event, that crossing of the river. But while it was happening, no one even knew of its existence.

It’s a paradox of retrospection: meaning is something we create after the fact by ignoring the manifold futures that were possible at that moment, by knowing how things will end. At the time nothing means anything, so we don’t write it down. In The Idiot Batuman’s Selin has recreated many such moments and now walks around inside them, suspended, looking.

But for what? Drifting on the tide of detail we find moments of immanence, where past-Selin seems to cast herself forward through time, as in a Hungarian shower, where she trains the handheld showerhead between her legs and tells us, “The sensation was both new and familiar, like a song I’d heard incompletely a long time ago. As I felt my whole body contract and tighten around something that wasn’t there, I felt like I understood for the first time what the point of sex would be.”

There’s also Selin’s gradual and then continual drive to write, which builds to a pitch near the novel’s end as she sits in the guest room of Ivan’s childhood home in Budapest, writing:

I kept thinking about the uneven quality of time—the way it was almost always so empty, and then with no warning came a few days that felt so dense and alive and real that it seemed indisputable that that was what life was, that its real nature had finally been revealed. But then time passed and unthinkably grew dead again, and it turned out that that fullness had been an aberration and might never come back. I wanted to write about it while I could still feel it and see it around me, while the teacups still seemed to be trembling. Suddenly it occurred to me that maybe the point of writing wasn’t just to record something past but also to prolong the present, like Arabian Nights, to glide through time until the next thing happened, and just as I had that thought I saw a dark shape behind the frosted glass and heard a knock on the door.

It’s Ivan. They talk. He clearly cares for her. They say a lot but still there’s a sense of incompleteness. Much is unexplained. They say goodnight. The next day they say goodbye. They hug; it’s the most physical contact they’ve had. He leaves for Thailand.

The Idiot can be described as a novel about Ivan, but that would be too simple. It’s a novel about how we create ourselves from our experiences. “Adolescence,” Proust claims in Batuman’s epigraph, “is the only period in which we learn anything.” Selin’s tale ends, “I hadn’t learned anything at all.” Between these extremes, both of them at once, is The Idiot.