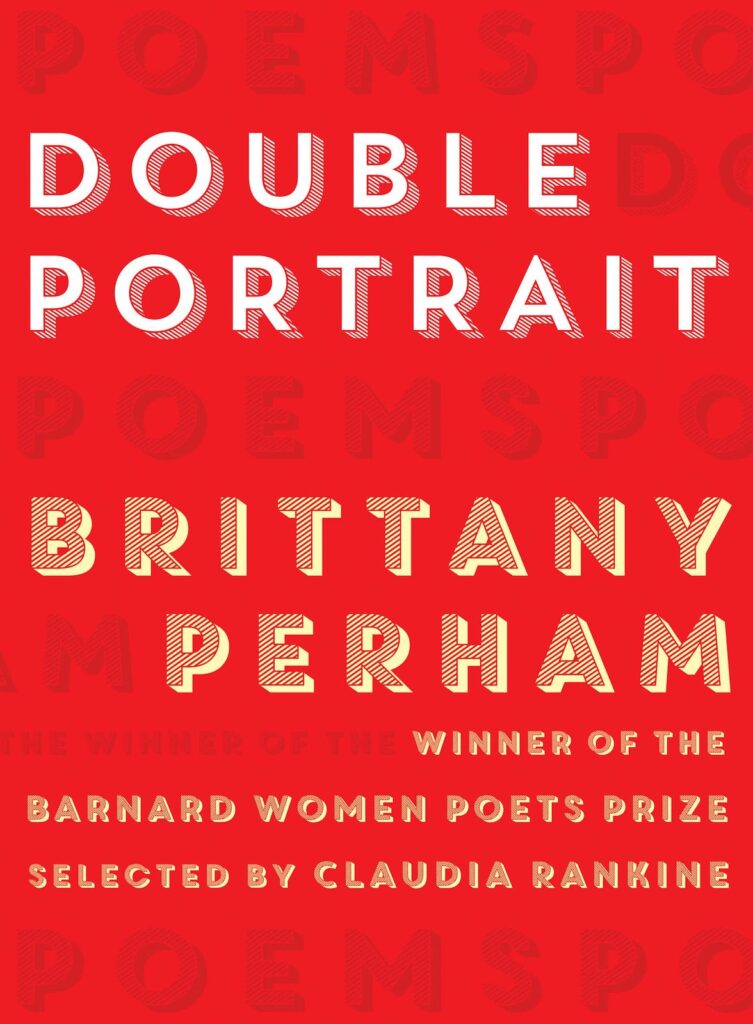 In art a double portrait is a painting that depicts unity or extension: the singular portrait becomes plural with the introduction of a second body into the single frame of the canvas. One body must confess or concede its link to another. What is seen and captured by the artist is the communion of two: lover and lover, enemy and enemy, friend and friend, parent and child. There on the canvas the two people are bound together in a declaration of their inseparable nature. And in this beautiful doubling, this symmetrical weighting of each side of the canvas, what is created at the center is empty space, the hinge that makes the presentation of two possible. It is this hinge that obsesses Brittany Perham’s collection, Double Portrait. Poem to poem, line to line, I to you, this book explores the painfully elating distance that both binds and separates opposite forces and individual bodies.

In the opening poem, “DP.f.10” Perham sets the reader up to understand both the incredible distance and the incredible closeness between opposites, saying:

It can happen after a swordfight or a sound night’s sleep:
you make coffee and boom you’re vomiting blood.

Because the opposite has not yet occurred it is infinitely far away, but because it could occur in an instant, seemingly at random, it is also incredibly close. Two such extremes as not vomiting blood and vomiting blood seem only to have a small hinge between them. Perham creates this hinge through the combination of the declarative and the conditional: “I am not” / “I could be”. The reader also feels the conjunctions and and or as the linguistic hinges between moments. As the poem continues the extreme opposites of “the villain and the tragic hero” are equalized and equated by the hinge of them both vomiting blood. These two become a singular man, who the speaker, with her “warm feelings” tries to keep alive. In the end of the poem, what was combined is again pulled apart into two: “A daughter should / be holding the bin to catch your vomit and your blood.”

Each poem in the collection is a double portrait, titled by a reference number and presented out of sequential order. Rather than a linear order, this arrangement suggests a thematic linking between the poems grouped in each of the four series. As a reader, I read cover to cover, then backwards, and finally I leap around through the collection. This ordering principle invites this tendency: wander, wander, and return to what caught your eye. The reader becomes an active participant in the world of the book, choosing what to view and in what order. The numbering is also not complete; the book leaves out DP.f.01-DP.f.09 for example. With the acknowledged absence, the reader must wonder at the double portraits they don’t see. The reader feels these poems as a selected exhibit.

Throughout the collection, distances feel like points on the spectrum of proximity. Nothing is unrelated; nothing is not touching. The lovers that move through these poems are always still leashed to one another, no matter how far they run. The mother and father in the first series find their mirrored image in the tangled lovers in the second series. It is this motion—the tug and press between forces—that drives the collection. Each poem seems to move side-to-side even as it moves forward. You might imagine a handcar pushing along the tracks, the speaker pumping the handle up and down to create the drive forward. It is this resistance that gives the motion so much pleasure and suspense.

It is true in many poems that you almost can forget the medium is language, so complete and transporting are their narratives. This is thrillingly not the case with Perham’s poems. The reading, the experience of language, is at the heart of her project. Language itself feels like the landscape through which the I and you and other people are moving, slipping into and around one another. These poems do not want to recall so much as they want to remake a world of memory and connection through language. Perham involves the reader in the writing of the poems. In her poem “DP.b.13” she explores the speaker’s distance from the beloved through her mediation on the act of writing, saying:

to throw that word around. I still can’t hold
the definition in my head, as with “rubric” or “prodigal.”
There are a few other things I can’t quite get a fix on.
The placement of the period: inside or outside the quotation mark?
If there is no rhyme, and no meter, how do you find the boundary

of the line? It seems now that every line should end with “you”
because this would best mimic the working of my brain.
But the method is impractical.
I’m not writing a ghazal. I can’t give you that kind of space.

The relationship and its ending is also an experience of language. The obsessive thinking about the beloved is demonstrated not in image, but in an awareness of poetic form that obsesses in the same way. It is as if to be let into the mind of the speaker, the reader must be let in to the making of the poem, so linked are the two.

The entire collection is rich with poetic form, refrains, repetitions, and music. Variations and re-imaginings of classic forms like pantoums, ghazals, and sonnets combine with Perham’s precise invented forms. A free-verse voice rings against the walls of form. In “DP.b.01” the ghazal form allows the poem to inspect the word forever:

“You’ll be asking me about forever forever?”

(grammatically suggesting, “until we die,”
the happy equivalent of forever),

I swiveled my stool, I drank my wine;
I knew I’d be doing this forever

come hell or high water,
come a future minus you or forever,

The amplification of forever both unhinges it from its meaning and also gives its meaning incredible emphasis. Forever feels at once permanent and tenuous. This doubling is so palpable that when the poem ends—answering the question “Will I love you forever?”—it is no surprise that “the answer could be yes” because it also so easily be no. The world of forever-with and the world of forever-without feel separated merely by a small hinge represented in the poem by the conditional. The reader is left with a feeling of howclose those two very different worlds always are.

For all that is harsh and aching in these poems, there is also lightness, a buoyancy that is both unsettling and infectious. It is the sing-song, the nursery rhyme ancestry of some of these poems that is part of their unhinged delight. For all that is breaking or broken, someone is laughing in these poems. These poems never left the reader forget what a pleasure it is to read, even when what is being read makes us want to weep. Again, the doubling. Again, the mirrored edges of poetry. It is so difficult to acknowledge both sides, to hold them so both can be seen, to let them occupy the same space, and this is what Perham’s stunning collection of poems does so well.