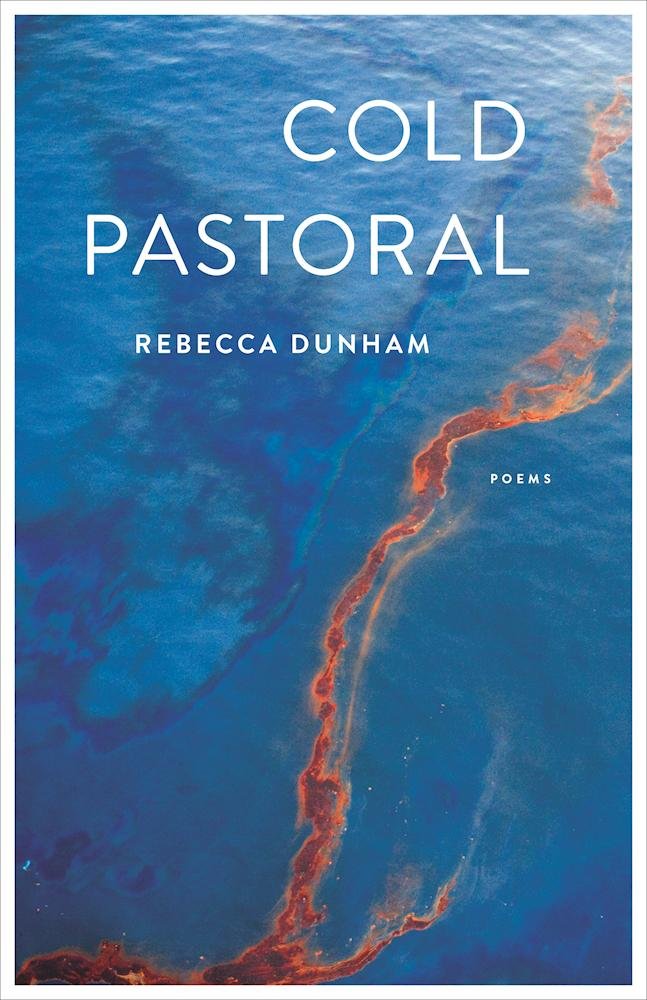 Rebecca Dunham’s newest poetry collection, Cold Pastoral, begins with a poem entitled “Mnemosyne to the Poet.” As opening to a collection that documents disaster—both man-made and ecological—Mnemosyne laments, “For you, memory is but / an oil lamp to snuff,” and later, “I am not permitted / / to turn…Am not permitted / to learn how not to look.” So stands Dunham’s challenge in Cold Pastoral: how to elegize when memory is difficult to look at head-on, when the loss is too dark, or when it threatens to hold you accountable? How to write clearly of crisis when you are “the poet of the eye / filled with dirt”? In a collection that investigates the Deepwater Horizon oil spill, the sixth mass extinction, the 2011 tornado in Joplin, and other tragedies, Dunham uses elegy as a medium not just for mourning, but also as a way to inform and uncover. In “A Hive of Boxes,” Dunham writes, “The only thing worse than the disaster itself is what happens / when the world decides it’s over.” She asks, “Who will witness what follows danger’s first aftermath? / Who will document the crisis that bleeds on and on?” In answer, Cold Pastoral comes as a spell against forgetting, an offering of testimony, lyric, and elegy, a quest first to understand, and then to ignite into memory.

Throughout the collection, Dunham’s language is carefully wrought— her poems are able both to inform readers on the tragedy at hand and channel the emotional urgency of the moment. A poet of rich, singing diction and wild imagery, Dunham wields language as a way to conjure the reader into the position of witness. Recounting the damage of the 2011 Joplin tornado, she describes a dovecote: “windows blown-in / and emptysocketed as a skull.” Of a photograph of the Deepwater Horizon’s collapse, she writes in “Elegy, Sung in Dirt,”

Feather-vaned, the smoke
flows up, black-
blooded as the oil plumes
that will soon unwind
below.

Dunham’s language is detailed, textural, using metaphor to make tragedy not just haunting but also embodied—“skull,” “blooded”—and she refuses to shield the reader from grief. And yet, when facts are able to ring with their own unembellished emotion, she tempers her language, as in “Elegy for the Eleven.” Of the deceased Gordon Jones, Blair Manuel, and Karl Kleppinger, she writes,

They were the first
to go. Mud and gas
rising, two and a half
miles of earth
and another mile of sea.
Some depths aren’t
meant to be plumbed.

Lineation and spacing quietly shape emphasis, but Dunham doesn’t obscure the text with elaborate diction—she honors her subjects by letting them speak for themselves.

In a collection that asks the reader to fully see others’ pain even as the speaker struggles to do so, Dunham’s willingness to approach her own language with a critical eye is essential in making her challenge to the reader feel genuine. In a series of “Field Note, 2011” poems that occur throughout the book, Dunham scrutinizes her own tendency to shy from tragedy as she recounts interviews with an oyster farmer whose business died after the oil spill. She writes in the third “Field Note, 2011,” “I owe him more than this / utterance unheard— / must learn, at last, to look.” Dunham acknowledges that her poem is ineffective if it only exists as a detached recounting of the interview, and, in doing so, allows the poem to beg the question of readers: is simply reading the poem enough, either? Even when it means accepting her own contribution to a crisis, Dunham pushes herself to the vulnerability of honesty, as in “In Which She Opens the Box,” when she confesses, “I thought I knew about the cruelty of men…I never thought men could mean me, never / imagined lives of literal night.” Elsewhere, she admits that even language fails her, ending an elegy with the grasping assertion, “There must be some way to say this.”

When her own language does not suffice, Dunham yields her poems to other voices—the quoted testimony of a victim, for example, or a persona of Narcissus—and draws the reader closer to the experience of tragedy as a result. In one section of the haunting “Initial Exploration Report: Macondo Well,” composed of excerpts from BP’s predrilling analysis of risks, Dunham presents the simple and terrifying excerpt, “birds could become oiled.” Later, the most extensively multitextural poem of the collection, “A Hive of Boxes,” features an array of quotes from artists and scholars, and her speaker dissolves into and out of the poem, creating one sustained meditation on the nature of documentation. In “Et in Arcadia Ego” of “A Hive of Boxes,” Dunham imagines herself into the Poussin painting: “I am the one on the right, / pointing, asking anyone anywhere to make sense of what this / could mean.” Dunham invokes many voices in her endeavor to understand tragedy. In Cold Pastoral, Rebecca Dunham assigns herself a difficult task—to document disaster in a way that will last—and yet she is fiercely successful in offering elegies that resonate on multiple levels: conveying a memory so that it appears vivid, honoring victims by investigating the details of their tragedies, and challenging the reader to recognize loss and remember it. While Dunham does not claim to be an exceptional witness, her willingness to press into memory with vulnerability opens poems up to events that are in danger of being forgotten. As she words it, “I try so hard to wake. To glean what remains of this harvest. / To wipe the webs free.”

This review by Courtney Flerlage appears in print in Meridian 38, Winter 2017.
PrevPreviousReview: You Ask Me to Talk About the Interior by Carolina Ebeid
NextReview: Perfect Little World by Kevin WilsonNext
MASTHEAD