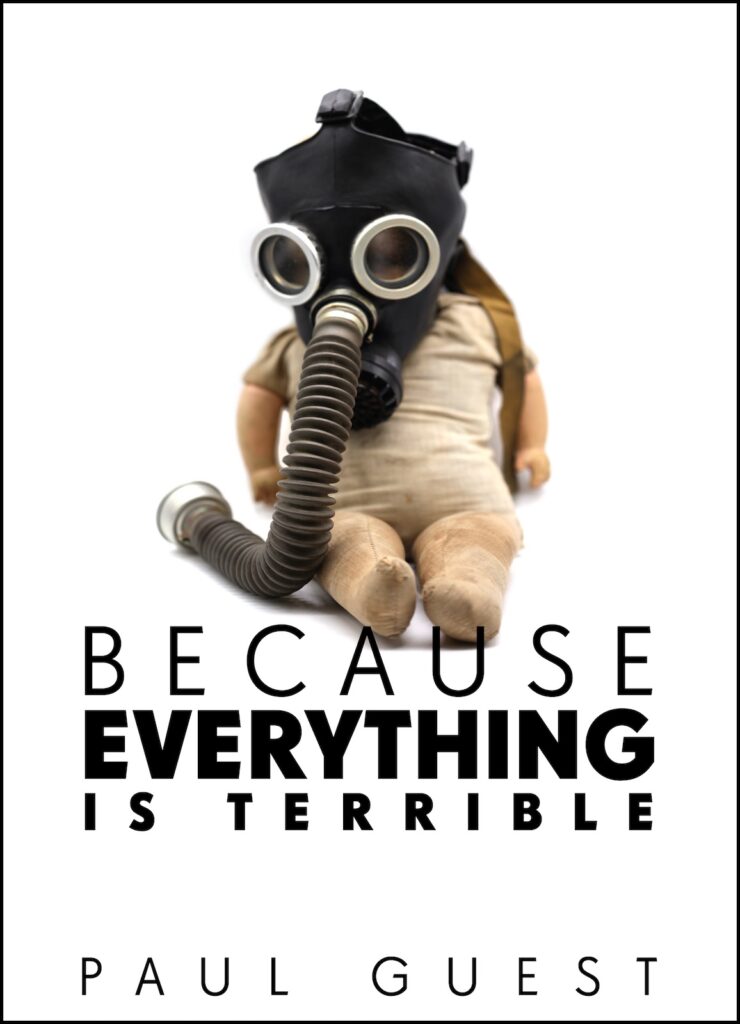 Because Everything Is Terrible
by Paul Guest
Diode Editions
January 1, 2018

Review: Because Everything is Terrible by Paul Guest

Paul Guest’s fourth book of poems opens in a low-lit forest, a slanted landscape with “pine trees leaning in.” Guest invokes Mark Twain: “All right, then I’ll go to hell.” It’s the line muttered by Huck Finn as he abandons his religious upbringing, and chooses not to turn in Jim, his friend and runaway slave. A poem with this epigraph promises to be a confession or a moral revelation. If x is wrong, I don’t want to be right.

Guest begins in suit: “First, this happened.” What then follows—though he mentions Vacation Bible School, describes his Huck Finn paperback fatted in a bathtub—is more invention than confession, the dreaming speaker lost in a war zone, “the water loud with escape.” I can almost see Guest grinning while he skirts the expected, with lines that leap and accumulate, in a river of images, even as he mirrors Twain’s southern boyhood, disarmingly straightforward diction, and interest in shedding light on the hypocritical American landscape.

This subversive quality is signature Guest, in his poems that sing their contradictions: funny/sad; narrative/lyric; confessional/veiled; real/imagined. If everything is terrible, beauty can be found even in pain: “your naked heels bled on desiccated curves of bark” (14).

Over twenty-one pages, and in thirteen sections, this first long poem “After Damascus” introduces us to Guest’s poetic obsessions that he’ll excavate over the course of the book. He presents us with the overlap between technology and war: “ammunition and mean-looking blades to clip to their belts like phones” (15); the overlap between the body and the landscape, both earthly and manmade: “your ligaments creaked/ like ropes in a storm” (22); “the gushing artery of the interstate” (23); “If you inhale, the air has a taste./ Copper wire, or blood” (25).

He poses nostalgia as comfort—“It should not go unsaid/ how happy you were”— referencing John Wayne and Esther Williams alongside texts and youtube (22). Comically, he nearly gets off on it: “I’ll vibrate with nostalgia/ for that world without/ pain.” At the same time, Guest is too honest and too politically conscious to call on nostalgia without its accompanying MAGA threat: “Everything was pitiable” (20); “there is only old menace/waiting for you” (28).

In the emotional climax of this first poem, Guest returns inwards and writes with searing clarity about the frailty of his own body:

You shouldn’t feel so fragile, so fated
to be dashed to dust by a strong sneeze.
But, you do: all day long you wait
to fall beside the toilet, or trip on a rug.
To know that inside your body
something has shattered.

Bodies continue to fall, to break. Monsters haunt childhood bedrooms. The sun burns out. Glass bottles expand and explode. Guest’s America is desiccated, and he uses that very word three times in the book, to describe hollowed out bark, stationary, and apples. In “Inaugural Poem” and “Hurray for the Modern,” Guest’s language desiccates, too, the lines sparser and in couplets.

Throughout the book, Guest reaches for the right language to describe how terrible everything has gotten, the ineffable echoing across poems: “You were about to pray. What were the words?” (34). We then get as concentric circle: “America, you know/ the words; sing them with me” (42).

What’s most admirable about Because Everything Is Terrible is the bare and grasping quality of Guest’s work, his willingness to ask the questions that haunt all of us, existential questions we pretend we’ve made peace with, or else put out of mind:

Where
Will I go when all
the clocks wind down
and what to say
to the moon’s glowing
face? Tell me:
if you know. When you are near.

Guest takes an earnest and honest look at his fears. “All right then,” he shrugs. “I’ll go to hell.” Or, as Lucia Perillo, to whom the book is dedicated, once wrote: “How resigned you were/ to your oblivion.” At times, he even greets this oblivion with cheer:

Imagine what it would be
To fall into nothing—
The excitement of another’s oblivion.
See, I am bound
to that which erases.

In a recent conversation, Guest told me nuclear war was an imminent, ever-present menace hanging over his childhood, compared to the far-off seeming threat scientists had begun to call Global Warming. Here’s a poet whose childhood fears remain lucid companions, who can summon arresting images of innocence shadowed by catastrophe, as in “Immediate Poem:”

Difficult to sing to the flames in the distance.
The gun-play and hijinks
And mushroom clouds
Rising into the air like flowers.

In an interview Maggie Nelson said she often writes toward a “ghost book” that “secretly—or not so secretly” stands behind hers “not just as its muse, but often as its literal stylistic and/or structural model.” While I wouldn’t say Guest has modeled his book’s structure on another—this work is too polyphonic, too shifting for that—I can see poets Lucia Perillo, Larry Levis, and Craig Arnold haunting or at least resting on these pages. The three are poets who died tragically young. Arnold vanished while hiking a volcano in Japan, a death Guest risks admitting that he desires in the poem “I want.” This is yet another subtle echo in the book: “I don’t pretend to understand/ this apocalypse of honeybees/ vanishing from the planet” and “I want to disappear/ in the night. I want/ the night to vanish from memory./ I want to tell you/ how this happened” (72, 96).

At times the three poets inhabit a single poem: “Elegy with Narrative of Tragic Passing, Nostalgia, and Perfunctory Invocation of Peace” is dedicated to Craig Arnold, borrows its title, stylistically, from Levis’s elegies, and surges with the somatic anxiety that characterizes Perillo’s work. And because Guest has called on these poets, whom we’ve lost, I’ll close with the final lines of Craig Arnold’s poem “Bird-Understander,” a poem that reminds me of Guest’s project—his insistence in facing his pain, in sorting through America’s dessicated state, in his hunt for the most accurate words to suit his meaning. I like to think of this poem as speaking back to Guest, from beyond the grave, or at least saying, far more eloquently than I, that Guest’s generous, searching book is one we urgently need on our shelves today.

Nichole LeFebvre is the nonfiction editor of Meridian.
PrevPreviousReview: Melville: A Novel by Jean Giono
NextReview: The World Goes On by László KrasznahorkaiNext
MASTHEAD