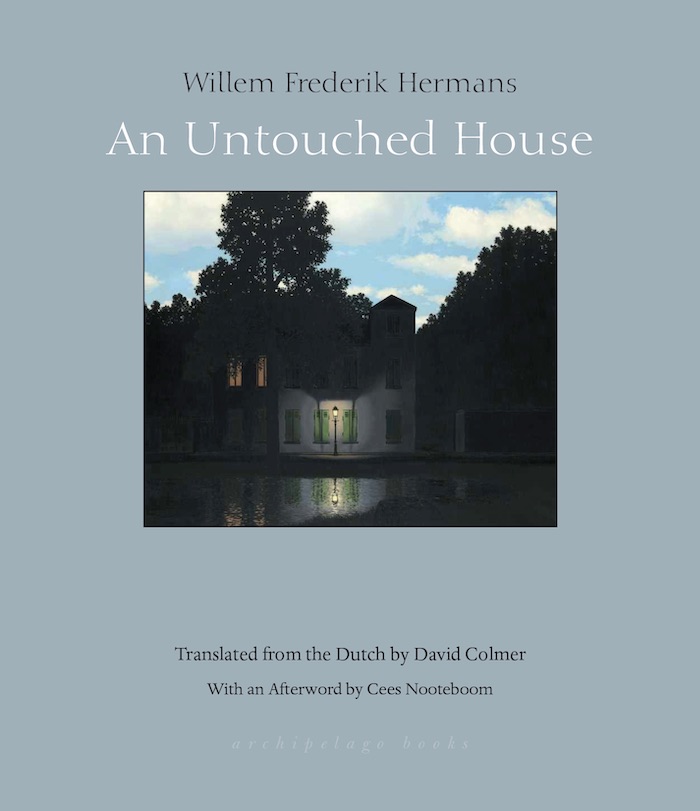 The incomprehensible evil of the early twentieth century’s fascist regimes has made it easy to fall into a trap of thinking—one which governments that send their peoples to war would like for us to fall into—that conflict could conceivably be reduced to a struggle between good and bad. We should be wary of narratives that seek to make us forget that the winning side always writes the history books. In the case of World War II the allied powers have been granted the privilege of brushing the ambiguities –and atrocities– of their wartime acts under the carpet. This, above all, is what Willem Frederik Hermans’ brilliant novella An Untouched House (Dutch: Het Behouden Huis) reminds us of. Evil is an actor in every war, but it is not incarnated in one army nor another. It is war itself. It is what becomes of the souls and minds of humans when they enter that arena of senselessness.

An unbroken, single-chapter novella running for some eighty pages, An Untouched House follows an unnamed Dutch partisan who, in the waning months of WWII, ends up claiming for his own the titular untouched house, a well-stocked mansion in a spa town, abandoned by the inhabitants so recently that there is still warm soup in the pan and no dust on the surfaces. Wandering in a desensitized haze, obeying orders shouted at him in a language he doesn’t understand, the protagonist stumbles upon the house alone. When he decides to stay there, the choice is made with the same shell-shocked indifference with which everything occurs in the book. He adopts the owners’ clothes, eats their food, bathes in their tubs, and when the Germans finally arrive having captured the area, he welcomes them into “his” home, obtaining a permit to live unbothered in the town. It is a novel of desperate survival. But the sensation it transmits is not desperation; rather, the entirety of it, even the horrific scenes of death and torture, feels like a nightmarish dream through which both the reader and the characters wander, without much choice and absolved of all morality.

The novella reaches its climax when the partisan’s company comes back to capture the town. The conquering heroes bring with them an unprecedented wave of senseless violence. They are no longer capable of distinguishing from revelry. All sides and purposes have broken down. The protagonist has no difficulty pretending to switch back and forth between the German and allied armies, because it is all the same: the violence has taken on a life of its own, and no longer has anything to do with nations or ideology or even that word that so obsesses the German commanders in the novel: culture.

Is An Untouched House grim? Perhaps. Even nihilistic? Yes. And yet it is also very beautiful. Hermans’ writing is austere and elegant; its poetry is to be found in the way that artillery fire and screams fade to background noise at the sight of a house or a valley, in the way the protagonist forgets the bullets flying around him during a vineyard battle in order to stuff his cheeks full of sour grapes, in the existential quality of his reflections as he muses, mid-slaughter:

Imagine somebody who doesn’t have a memory, who can’t think of anything beyond what he sees, hears and feels… He hears a booming sound, he sees people sprawled out here and there, it’s warm, the sun is shining, three planes are practicing skywriting. Nothing going on. War doesn’t exist.

It is perhaps this very immediacy, the apparent inexistence of anything beyond the present moment, which makes Hermans’ novella not only bearable, but utterly immersive.

An Untouched House is a demonstration of the power of the novella as a literary form: everything about this book—its brevity, the reverie-like nature of its narration, the quiet brutality of its language–demands for it to be a single-sitting read. It draws the reader in, only for an afternoon or two, and though it will make them suffer, it will leave them with a profound impression far beyond the slim dimensions of the book.

Ultimately, An Untouched House is an important work because it does what is most difficult, and most unpopular: it forces us to cast off any and all ideological constraints, and to look nakedly at humanity itself; its savagery, its delusions. And sometimes, just sometimes, it attempts compassion.

Juan E. Suarez is an Ecuadorian fiction writer, currently doing an MFA at the University of Virginia. Influenced by an obsession with writers, filmmakers and artists as diverse as Antonio ii Benedetto, Nabokov, Carlos Reygadas and painter Nelson Roman, Juan Suarez' ongoing fascinations include Domestication, Cities, and how we come to terms with History.
PrevPreviousReview: The Lies That Bind: Rethinking Identity by Kwame Anthony Appiah
NextReview: Wilder by Claire WahmanholmNext
MASTHEAD